Celebs Bash Weinstein, Praise ‘Rape-Rapper’ Eminem For His ‘F*** You!’ to Trump Supporters 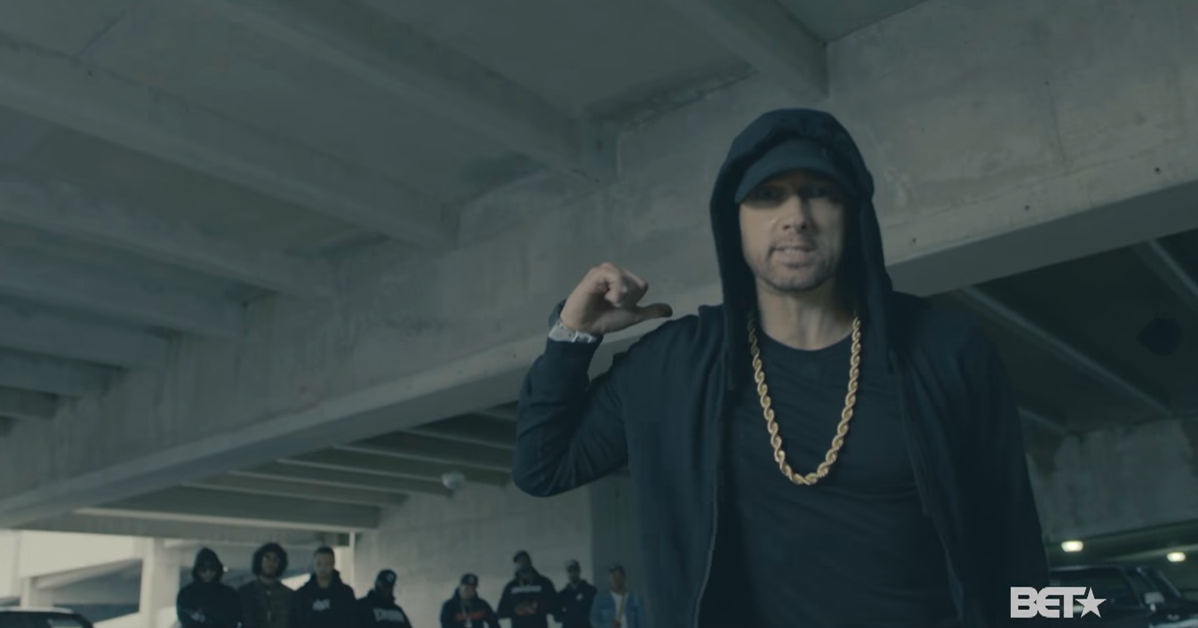 At the BET awards on October 10, rapper Eminem released a 4 minute rap-rant on Trump in a video, which caused NPR to say “Eminem returned to relevance last night.” In the rap, Eminem called Trump, among other things, a “kamikaze that will probably cause a nuclear holocaust,” “a racist 94-year-old grandpa,” and “Donald the bitch.”

He ended the video with a slam at his fans who may have been Trump supporters: “And any fan of mine whose a supporter of his, I’m drawing in the sand a line, you’re either for or against, and if you can’t decide who you like more in your split, on who you should stand beside, I’ll do it for you with this: fuck you!”

At one point in the rap, Eminem puts up a fist, saying, “This is for Colin, putting up a fist!” Kaepernick retweeted the video, saying, “I appreciate you @Eminem.” Rosie O’Donnell retweeted Kaepernick’s statement and added to it: “and I appreciate you both - strong men - strong hearts #systemicRACISM.” Later she tweeted, “Marshall Mathers Matters.”

Jack Antonoff from the band Bleachers (and Lena Dunham’s boyfriend) tweeted, “eminem delivers the clearest and most beautiful anti trump moment.” He later tweeted that the video was “actual performance art.”

Will & Grace actress Debra Messing posted the story, saying: “WOW! Watch @Eminem tell his Trump lovin’ fans to F$CK OFF in a freestyle rap.” LeBron James retweeted a lyric from the video, one that called Trump racist. Even Ellen Degeneres tweeted her support for Eminem.

While everyone praises Eminem for dissing Trump and rightfully denounces producer Harvey Weinstein, it’s important to remember this is the rapper who released a song called “Stay Wide Awake,” where he sang about raping and assaulting a girl. The lyrics are below:

I see my target with my car, and park and approach her tender.

Young girl by the name of Brenda and I pretend to befriend her.

Sit down beside her like a spider, "Hi there girl you mighta

heard of me before. See, whore, you’re the kinda girl that I’d

assault and rape and figure why not try to make your pussy wider.

Fuck you with an umbrella then open it up while that shits inside ya.”

In February of 2017, after rapper Big Sean and Eminem released a collaboration called “No Favors,” NME reported: “the RINJ (Rape Is No Joke) Foundation branded Eminem and Big Sean “rape rappers” and said it “strongly urges” fans to boycott them. On Facebook, the RINJ’s CEO Micheal O’Brien accused the track of “encouraging rape & physical violence against American author Ann Coulter”, and said it was “symbolic of the direction America appears to be headed.”

But as long as that person hates Trump, a little misogyny can be covered up. That’s the kind of attitude that gave Hollywood Harvey Weinstein.