In the aftermath of Charlottesville, when the term “hate group” is used, images of the KKK and neo-nazis immediately come to mind.

However, according to CNN, the real hate groups to watch out for are the conservative organizations, specifically Alliance Defending Freedom (ADF), the Family Research Council (FRC), American Family Association and ACT for America. 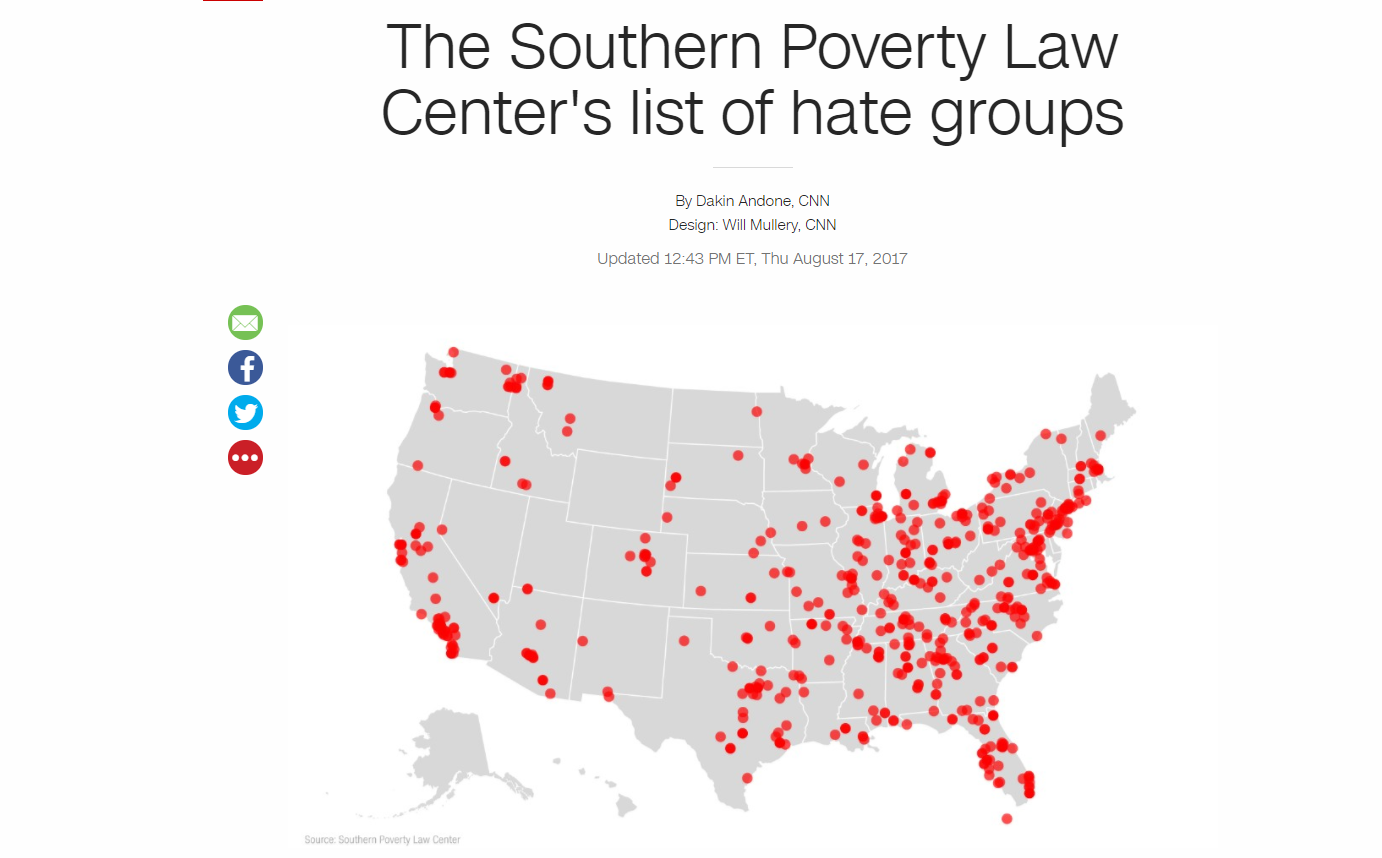 CNN copied the Southern Poverty Law Center’s (SPLC) controversial and dangerous hate map, and posted a list organized by state and alphabetical order. At the top of the list for Arizona are ACT for America and the ADF. Later, at 12:43 pm, CNN took the list down but left the story and the link to SPLC up. Previously, they had a sentence that said, "Scroll down to see the hate groups that operate out of your state."

CNN essentially reinforced the SPLC’s longstanding attacks against conservative groups. The SPLC hate map actually led to a shooting and an act of domestic terrorism.

The Family Research Council, described by the SPLC as “defaming gays and lesbians,” was attacked by Floyd Lee Corkins on August 15, 2012, who “wanted to kill as many people as possible” because the organization was listed as an anti-LGBTQ hate group on the SPLC map.

CNN reported this in February of 2013.

“Corkins -- who had chosen the research council as his target after finding it listed as an anti-gay group on the website of the Southern Poverty Law Center -- had planned to stride into the building and open fire on the people inside in an effort to kill as many as possible, he told investigators, according to the court documents.”

CBS News described the resolution of the case in 2013: “Corkins pleaded guilty to three charges: interstate transportation of a firearm and ammunition, assault with intent to kill while armed and act of terrorism while armed, a charge based on the shooting being intended to intimidate anyone who is associated with or supports the Family Research Council and other organizations that oppose gay marriage.”

It’s not just about the SPLC’s campaign against FRC. The ADF has been attacked by the mainstream media networks again and again as an anti-LGBTQ hate group, specifically by ABC News in July. In a statement given to Newsbusters in July, Alliance Defending Freedom Legal Counsel and Director of Communications Kerri Kupec said:

“Alliance Defending Freedom is one of the most respected and successful Supreme Court advocates in the legal profession, having won seven cases at the high court in the last seven years.

Southern Poverty Law Center spends its time and money attacking veterans, nuns, Muslims who oppose terrorism, Catholics, Evangelicals, and anyone else who dares disagree with its far-left ideology.

Meanwhile, ADF works every day to preserve and affirm free speech and the free exercise of religion for people from all walks of life and all backgrounds because we believe freedom is for everyone.”

There is a clear difference between the Alliance Defending Freedom and the American Nazi Party. These two groups should not be side by side on a hate map.

The ADF, founded in 1994, has been advocating for the right to freely practice Christian values in American society. Their website states, “Alliance Defending Freedom defends religious freedom and opposes all attempts to compel people to compromise their beliefs or retreat from civil and political life as the price for following their faith.”

That’s the hate speech aimed directly at the LGBTQ community, if you believe SPLC and CNN.

Even CNN acknowledged that the “hate map” was at the very least, controversial. “Some critics of the SPLC say the group’s activism biases how it categorizes certain groups. But since the FBI doesn’t keep track of domestic hate groups, the SPLC’s tally is the widely accepted one.”

By advocating for the SPLC and re-publishing its “hate group” map, CNN could be accused of encouraging the kind of violence and fear caused by the foiled Corkins attack. The New York Times and The Washington Post accepted a full page ad for the SPLC today. 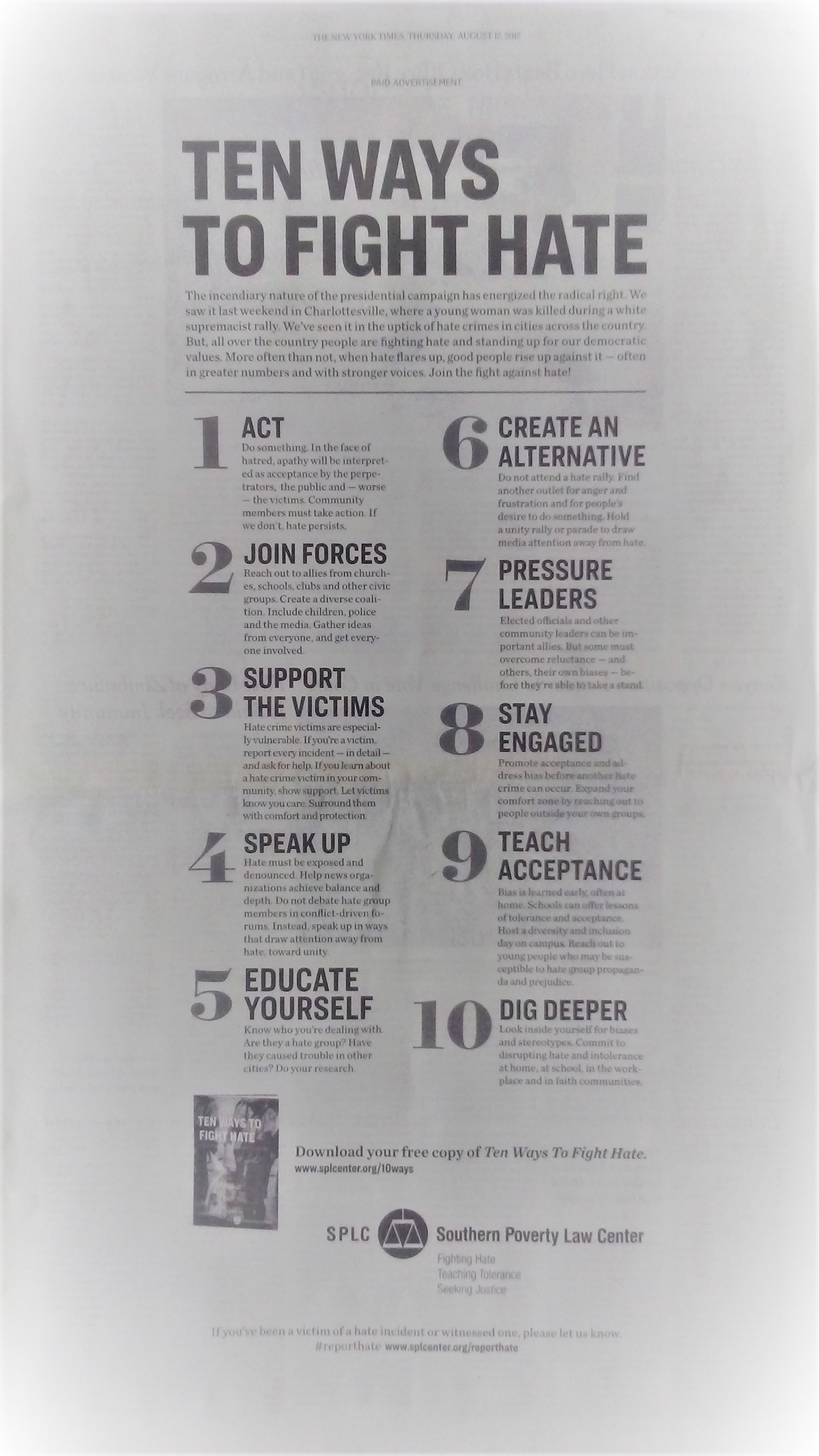 As a thin veneer for balance, the list also includes the Nation of Islam and the Black Panthers Groups. However, where these groups have been involved in violent incidents, the ADF, FRC, and ACT for America have not.

And even liberal media have recently attacked the SPLC as too extreme. POLITICO recently asked whether or not the group has pushed it’s civil rights credibility too far. Writer Ben Schreckinger actually called the founder of the SPLC “a little Trumpian,” the ultimate liberal insult. HBO talk show host Bill Maher admitted recently that he would join in a crowd-funded lawsuit against SPLC, according to the Washington Examiner.