It looks like the liberal minds behind the Women’s March know how to stay triggered by constitutional rights.

Tamika Mallory, the co-president of the Women’s March Inc., announced that the movement was going to to host a protest in front of the NRA headquarters in Fairfax, VA, on July 14th. They will march 17 miles from the NRA to the Department of Justice. 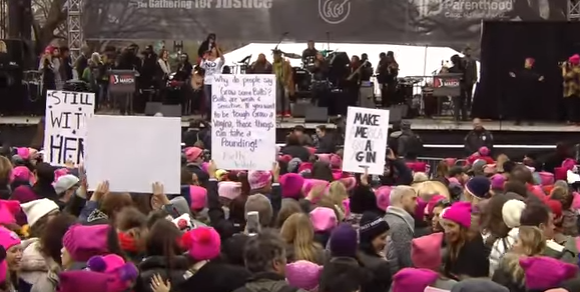 That’s an awful long way to march just because some liberals got teed off. The announcement, shared by the Women’s March Facebook page, started with this charming statement: “We know that we are not safe. But we will not be intimidated into silence.”

The group, made up of 158 George Soros-funded organizations (to the collective tune of $90,000,000), is going to hold a “mass mobilization for our safety.”

The outraged response was to the ads released by the NRA, specifically the videos starring conservative radio host Dana Loesch and the response video to the letter Tamika Mallory put out protesting Dana Loesch’s message.

However, the group is also angry because of the NRA didn’t speak up during the trial of a police officer who killed motorist and licensed gun owner Philando Castille. The NRA, say the group, maintained “silence on Mr. Castile’s constitutional right to own a gun.” Mallory requested that the organization join the Women’s March in “demanding that the Department of Justice indict the police officer who killed [Castile] for exercising his Second Amendment right.”

The March will take place in order to petition that the NRA take down their video ads.

They also want an apology issued “for the video that suggests armed violence against communities of color, progressives, and anyone who does not agree with this Administration’s policies.” Um. Nowhere in any of these videos was such violence suggested or mentioned.