David Letterman Calls Trump 'a Man Without a Soul'

David Letterman has a question for Donald Trump. He wants to ask him, “All right Don. What the fuck happened?”

The retired late night talk show host recently spoke with GQ magazine on his past history of interviews with Donald Trump and his current opinion of the President of the United States. Letterman talked to the interviewer about his experience with Donald Trump as a frequent guest on the show, Late Show with David Letterman. 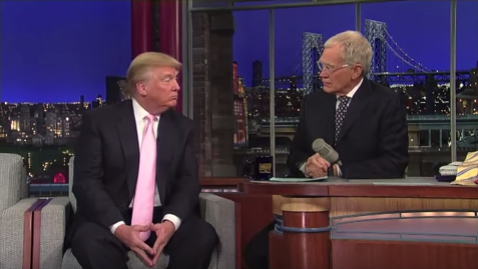 In the style of most late night comedians, Letterman is no stranger to political commentary and criticism. In the past, he has referred to Donald Trump as “a damaged human being,” and “somebody who's not behaving like any other human you've known.” Letterman's liberal outbursts make it clear he does not support the conservative agenda, as he has also attacked other people, such as Mitt Romney, Senator Ted Cruz, and Senator Rand Paul.

However, he has also mocked the other side as well, making jokes on his show about Obama's administration and Hilary Clinton's various scandals. In one segment of his show, Letterman joked about a possible scenario where Clinton could offer to delete relevant emails for the Patriots during the uproar caused by the Deflategate.

Letterman replied in the negative, describing Trump as a “big, wealthy dope who'd come on. . . I would refer to him as a slumlord.” These are strong words coming from Letterman, who at one point in his career was making 45 million dollars a year, and whose net worth is currently estimated at a hefty 425 million. In addition to this, Letterman owns his own production company, record label, and auto-racing team, so he also falls under the same category as Trump in terms of wealth.

But Letterman had even more to say about Trump. In fact, he made it infinitely clear that he is not, nor ever will be, a Trump supporter. He told Brett Martin, “I'm disappointed that this man is representing me and my country. It makes me sick.”

While most people are reaching for the #notmypresident to describe their feelings on Trump, Letterman decided to go even further.  He went on to speculate that something changed in Donald Trump's stance on government and politics for the worse, saying that Trump “has demonstrated himself to be a man without a core, a man without a soul.”