Many fans tuned into the latest installment of This Is Us, titled "Kamsahamnida," on Tuesday night. The episode was packed with drama, as usual. Kate was helping Toby fight depression, Kevin decided to go to Vietnam to follow his dad’s story and Randall was running for office in a local election. Randall wasn’t the only person trying to solicit votes in this episode, though.

One of the writers, Dan Fogelman, pointed out that they snuck in a crafty plug for liberal candidates and their agendas at the end of the episode. The end card or vanity card is becoming a popular tactic for Hollywood to even more directly insert politics into their shows. In the final moments of the episode, between the last scene and the credits, we see a card (pictured below) dedicated to the Tree of Life synagogue shooting victims—who, like the characters of This is Us, called Pittsburgh home. 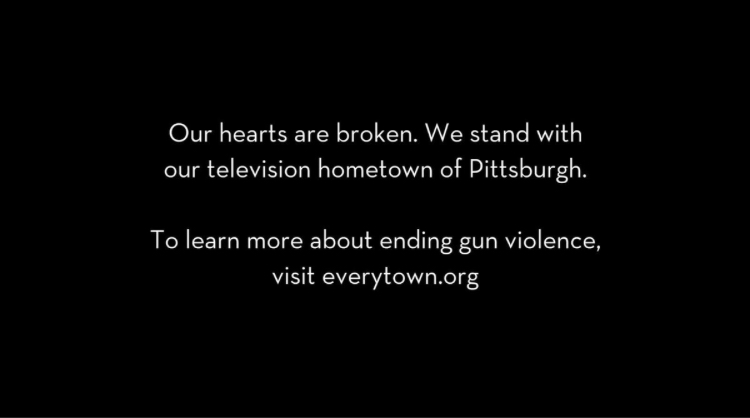 As devastating as this mass killing was, the left has used it to prop up their agenda. The slide directs people to the website of Everytown for Gun Safety, funded by billionaire Michael Bloomberg, which is known for its anti-gun propaganda and misleading stats. The site features a call for people to "make a plan to vote for gun safety" and vote for candidates “committed to ending gun violence” on November 6. According to Axios, Everytown "is pouring over $11 million into digital ads to help vulnerable Democrats running for House seats this year."

Once again, Hollywood lectures us on gun control while promoting violence on television. In fact, just a few weeks ago NBC aired a Law & Order: SVU episode on a school shooting and blamed toxic masculinity for it.

Seriously, NBC, have you really stooped to using a tragedy like this to promote liberal agendas and solicit votes?