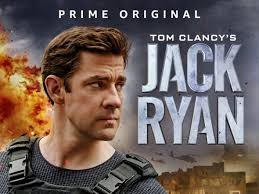 I'm a pretty big fan of the stories featuring Jack Ryan (there are more than 20 books by Tom Clancy, plus movies including Clear and Present Danger, The Hunt for Red October, and The Sum of All Fears), so I was delighted that Amazon Prime came out with a new series based on the American CIA officer called simply "Tom Clancy's Jack Ryan" on August 31.

I will also admit to some trepidation, however, considering that this is 2018 and it seems that everything has to be ruined. I was definitely worried after the opening scene, but Jack Ryan, starring John Krasinski, ended up being some very balanced, pro-American fun.

The opening scene takes place in Lebanon in 1983. Two young boys are playing around, dancing to western music and doing their chores when, suddenly, American jets come roaring in and bomb a nearby village. They watch in horror before realizing that the jets are coming for their village next. This is one of a few things that suggest that the terrorists our title character is fighting against in this eight-episode series might not have been terrorists if Westerners had not made them so. As the series goes on, we see the two young boys as young men being misunderstood and mistreated in France, being radicalized in prison (of course, the imprisonment happened as a result of being mistreated), and so forth.

When the show opened on that scene, I thought perhaps Amazon was going to make Jack Ryan go fully left-wing and ruin all the fun. Fortunately, that was not the case. Geopolitics are complicated, and there was some hint of that rather than making it completely black and white, but there was no mistaking it - there are good guys and there are bad guys, and we, the Americans, are the good guys.

The terrorists are still very much portrayed as the bad guys, radicalizing and taking advantage of their own people and murdering innocents, including women and children. The Americans are doing everything they can to catch them and keep everyone safe. They're not alone, they do work with other European countries to catch the terrorists, but it is the Americans who get the job done and save the day. And I have no problem with that.

So, don't let the first scene scare you off. Roll your eyes and keep watching. You won't regret it.

But don't just take my word for it, Vanity Fair called Jack Ryan "a Patriotic Nightmare" and said, "Watching this show feels like falling down a Fox News rabbit hole." Reviewer Sonia Saraiya absolutely hated how pro-America the show is:

...this is a propulsive, enthusiastic, confident action-thriller that makes a glossy, gooey narrative of American generosity and valor. It lauds Jack Ryan—a true American hero who unfailingly escalates every situation and lacks even basic collaborative skills—while neglecting to even attempt to challenge the narrative of noble American involvement and intervention abroad. Both its protagonist and its plot are based on the foundational, unquestioned notion that American-military might—the best-funded killing infrastructure in human history—is helping to save the world.

... Jack Ryan feels like a machine designed to turn us all into the sort of viewers who disappear smiling down jingoistic Fox News rabbit holes. It assumes that we—Americans, and America—are doing a good job. Talk about a fantasy.