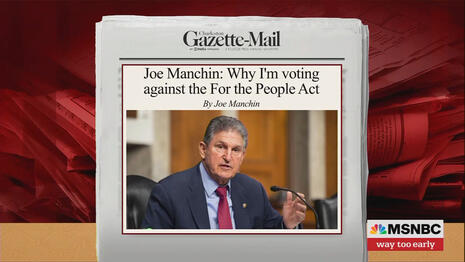 The obnoxious juveniles at Teen Vogue are at it again. In between puff pieces about transgenders and condemning the U.S. as racist, they’ve found time to lecture Senator Joe Manchin (D-WV) on “what young West Virginians want the Democratic senator to know.” Hint: The youth of the state that Donald Trump won by almost 40 points in 2020 want Manchin to move further left.

The headline of the story, posted Thursday by Sophie Hayssen, declared, “Manchin’s Bipartisanship Obsession Is Misguided.”

The piece claims to speak for young West Virginians, but it appears the article was pitched and sourced by an organization called Un-PAC, as almost every student quoted is an organizer and Hayssen relies on talking points from op-eds and press releases from the group.

Described as an “anti-lobbying group,” Un-PAC organizes young people to lobby their senators to pass the Democrat "For The People Act," which Hayssen says is “a bill designed to make voting easier and target big money in politics.”

In reality, this radical bill would open up our electoral process to all sorts of unsavory shenanigans by gutting voter ID laws, making absentee ballots and voter rolls less secure, and mandating same-day and auto-registration, not to mention subjecting citizens and non-profit organizations to intimidation, harassment and retaliation by political opponents and the IRS.

Un-PAC is not the only supposedly non-partisan group promoting the Democrat Party’s brazen attempt to federalize state and local elections, either. Clearly, there’s big money behind a bill that purportedly seeks to "target big money in politics."

This past spring, students at two of West Virginia’s largest schools, West Virginia University (WVU) and Marshall University, communicated their political priorities to Manchin by passing resolutions through their student governments and urged him to back the For The People Act…

“I thought that by passing a nonpartisan resolution representing almost 30,000 of his young constituents, Senator Manchin might realize how overwhelmingly young people all across the political spectrum support this bill and want it to pass,” [one Un-PAC student organizer] told Teen Vogue.

The resolutions were brought by Un-PAC organizers and passed by only 50 Student Government Association representatives at the two schools, according to the Un-PAC press release Tweet the story cited. That hardly “overwhelmingly” represents 30,000 young constituents, not to mention that college students are not very representative of any state’s total constituency.

As for the rest of the state, Hayssen deceptively wrote, “The Charleston Gazette-Mail reported that 58% of West Virginians strongly or somewhat agreed with the For The People Act, while only 30% strongly or somewhat opposed it.” Actually, that wasn’t reported in the news section but appeared in an opinion column that praised Un-PAC and cited their own poll.

On the other hand, we know that key aspects of the legislation, like preventing voter ID and forcing the public funding of campaigns, are incredibly unpopular.

Further adding to the slant of the article, the perspective of a supposedly Republican Un-PAC volunteer named Hunter Hardway was added to bash the GOP.

Hardway was particularly upset by the conduct of Senate Republicans, comparing their prioritization of party over country to “cutting off your nose to spite your face.” … Most importantly, Hardway hopes Manchin rethinks his understanding of bipartisanship in a way that centers on the people of West Virginia, not politicians in Washington.

“Bipartisanship is about when the Democrat constituents and the Republican constituents both want something,” he said. “Not whatever Senate Republicans and House leaders want.”

Little do these kids brainwashed by lies from Un-PAC know, it’s Democrat Senators and House members who are prioritizing party over country and trying to get whatever their party leaders want, without regard to Republican constituents. The For The People Act centers politicians in Washington, nationalizing elections so the people of West Virginia have little control over ensuring the security and integrity of ballots in their own state.

Thankfully, there are adults like Sen. Manchin protecting the young and stupid from themselves. Let's hope it stays that way.