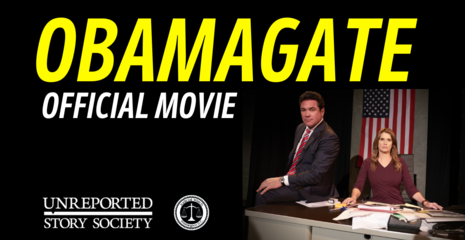 Co-produced by the Unreported Story Society and Judicial Watch and crowdfunded, ObamaGate is “about the Russia Collusion Hoax and the plot to destroy President Trump.” It is a comedic play that was filmed before a live audience “Hamilton style” at the Hudson Theater in Los Angeles and released on YouTube October 20 for free, public viewing.

According to a press release:

The film’s script is unique in that it is completely verbatim and consists of the text messages, declassified files, congressional and court transcripts, tweets, and statements of top government and FBI officials. It also features the embarrassing and conspiratorial text messages of “FBI Lovebirds” Peter Strzok and Lisa Page. Obamagate also features appearances by James Comey and the Obama CIA Chief James Brennan and their cringeworthy tweets are read aloud.

The movie bypasses the mainstream media spin by using primary sources. This stands in stark contrast to Showtime’s recent limited series The Comey Rule, which twisted the facts and included dialogue counter to written transcripts. In one relevant example, The Comey Rule addressed the Strzok-Page affair but imagined the couple saying a paraphrase of their actual texts to make them look better. ObamaGate exposes the truth behind their exchanges from the sources themselves, when they thought no one was watching.

“If you wanted to tell a story with just one perspective, you can do anything you want and you can change people’s perceptions of what took place,” explained ObamaGate star Cain. “When you do something verbatim, the words are there and it’s pretty darn clear. The verbatim texts themselves are damning.”

“Showtime is spending tens of millions of dollars to tell this lie and that’s why we’re creating Obamagate, to set the record straight. Whereas Showtime and The Comey Rule rely on dramatic fiction written by left-wing Hollywood writers, Obamagate is non-fiction and it is solely composed of the texts, emails, messages, and transcripts that clearly show the Deep State plot to take down President Trump. We are giving viewers the word-for-word facts so they can decide for themselves,” said co-producer Phelim McAleer.

McAleer and his wife Ann McElhininey head the Unreported Story Society and were also the filmmakers behind Gosnell, a drama about the trial of America's biggest serial killer abortionist Kermit Gosnell, and FrackNation, a documentary refuting anti-fracking activists.

The full movie can be viewed below: