iHeartRadio Awards Turn into iHeartGunControl: Eminem Raps, 'They Love Their Guns More Than Our Children' 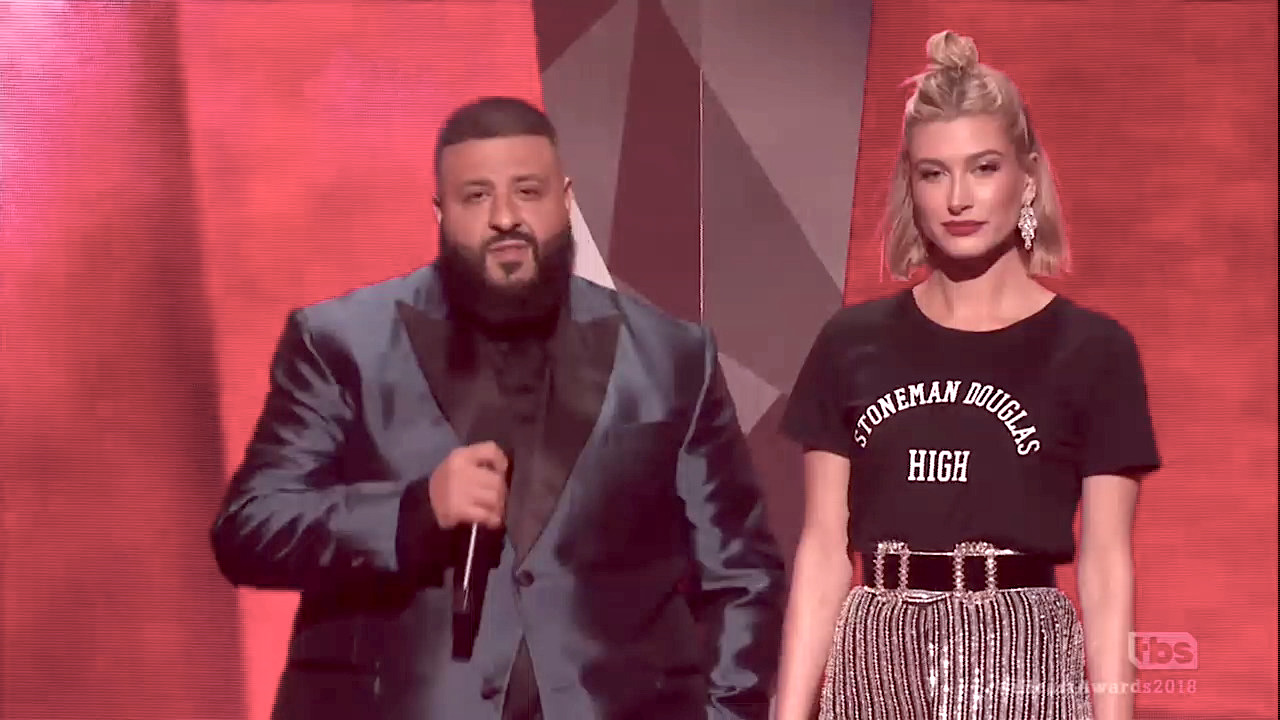 Hosted by model Hailey Baldwin and D.J. Khaled on TBS, Baldwin opened the show sporting a Marjory Stoneman Douglas High School t-shirt, which we know was a political statement because she is one of many celebrities touting the upcoming "March for Our Lives."

In fact, the iHeartRadio Awards gave one of the high school's students a platform to promote the national gun control rally they are organizing in response to the February 14 school shooting in Parkland, Fla. Alex Moscou encouraged viewers to attend the main event in Washington, D.C. or one of the local events across the country because "if those elected to represent us won't do what's right to keep us safe, then we are going to be too loud for them to ignore." Ah, yes, the old liberal maxim that "he who shouts the loudest wins the argument."

Then he helped rapper Big Sean introduce Eminem's performance with Kehlani of their song "Nowhere Fast." Much like the rapper Common at the Oscars a week ago, Eminem began with special lyrics dedicated to bashing the NRA.

Big Sean: We like to take a moment to introduce you to Alex Moscou, he’s a lacrosse goalie, he’s a member of the drama club, he is a sophomore who survived the attack by gunman at Marjory Stoneman Douglas High School in Parkland, Florida, killing 17 people. Make some noise for him. Alex, would like to say a few words himself, though.

Alex: Thanks, Sean. On February 14th, a gunman armed with a legally purchased, semiautomatic rifle murdered 17 people at my high school, Marjory Stoneman Douglas High School in Parkland, Florida. We are tired of hearing politicians send their thoughts and prayers to us and doing nothing to make the necessary changes to prevent this tragedy from happening again. School is a place where we should feel safe, and if those elected to represent us won't do what's right to keep us safe, then we are going to be too loud for them to ignore.

We're marching in Washington, D.C. on March 24th, for all of our fellow students and for the victims and survivors of gun violence in every community. From New Orleans to Chicago, Baltimore, or Detroit, wherever you are, we hope you will join us, go to marchforourlives.com to rsvp today. If you’re unable to make it to DC, you can join one of the 600 marches planned in every state across this country and even around the world. I'll be marching in Washington, D.C. representing Shine MSD, this will be a march for our lives. We are MSD strong.

Sean: Make some noise one more time for him. Thank you, Alex. Let's do this together. Let's introduce the next performer. In 1999, my mom bought the first CD from Costco, it was the Slim Shady LP and he’s been a legend ever since. So, repping my hometown of Detroit, make noise for the rap god himself, Eminem, featuring, Kehlani.

Eminem: ♪ ♪ ♪ ♪ Stoneman Douglas, another loaded gunman, sometimes I don’t know what this world has come to, it’s blowing up, this whole country is going nuts and the NRA is in our way, they’re responsible for this whole production, they hold the strings, they control the puppet, and they threaten to take away donor bucks so they know the government won’t do nothing and no one’s budging, gun owners clutching their loaded weapons, they love their guns more than our children. Shhh, I think another one just entered in our building.

Eminem should probably give David Hogg writing credits because those lines echo the same uninformed righteous indignation that teen has spouted in his hysterics against the NRA and gun owners.

That was not the only politics crammed into the 2 hour broadcast of an awards show purporting to celebrate the love of music played on the radio.

Ironically transgender actress Laverne Cox introduced the first ever L'Oreal Paris Fan Girls Award, given “to a woman who takes risk and defies all the odds.” The award was given to Camilla Cabello, a Cuban-Mexican-American singer born in Havana who last graced these pages when she advocated for DREAMers at the Grammys in January.

Cox said, “When she saw injustice for children, for DREAMers, and for women, did she just sit back? Oh, hell no. She uses her voice to fight for Save the Children, support the Women of Worth initiative, and speak out for the rights of immigrant children, because after all, she was one.”

Cabello returned Cox's praise, saying, “It’s people like Laverne that inspire me to be brave and inspire us all.” Because every transgender is "stunning and brave." Cabello also reminded the audience, “where you come from doesn't determine where you are going,” a trite inspirational phrase that takes on a different meaning in light of her activism for illegal immigrants.

Listen, the platform is called iHeartRadio, not iHeartOutspokenLiberalMusicians. Just shut up and sing.