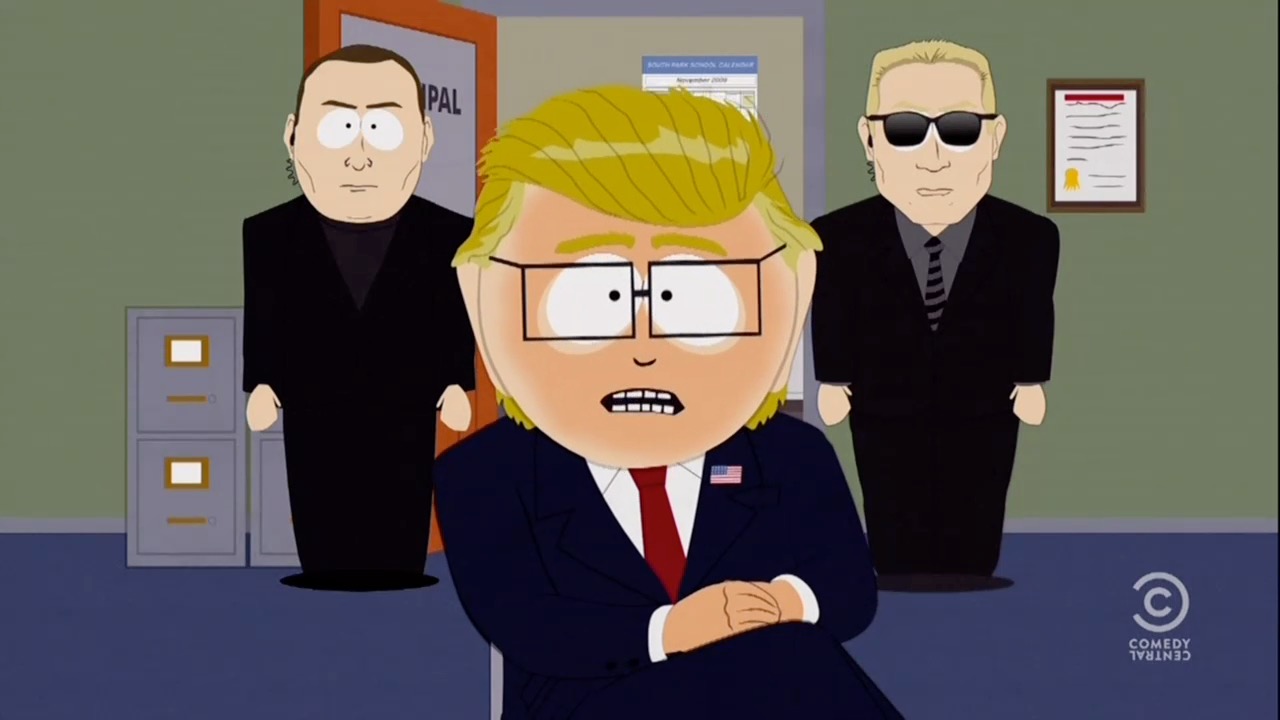 South Park goes full Trump in Wednesday night’s episode “Members Only.” Newly minted Presidential Chief of Staff Reince Priebus and Chief Strategist Steve Bannon are there to oversee Mr. Garrison completing the “transition” into Donald Trump – he now has Trump’s hair and facial expressions. I'm not even sure whether to refer to him as Mr. Garrison or Trump at this point.

But it’s the conversation between Mr. Garrison and PC Principal that has the most insightful social commentary about Trump voters getting revenge on the liberal PC police in this country and saying, “You created this.”

PC Principal: Certainly want to, uh, congratulate you on the election.

Mr. Garrison: Do you remember the day you fired me, PC Principal?

PC Principal: I know we've had some differences, uh –

Mr. Garrison: I was upset because a bunch of immigrants were changing my class, and I believe your response was that I needed to go and learn their language, be more open-minded.

PC Principal: I'm sorry that you're position here at the school was terminated.

Mr. Garrison: Are you really? Are you really sorry? Because you see, PC Principal, you helped create me. You insisted that I was a bigot, that I was an intolerant relic left over from another time. But now...I'm your president.

Then Mr. Garrison tells him, and pretty much anyone in town, to suck his you-know-what before being called to the Pentagon for a matter of national security.

Clearly this scene at the Pentagon was intended to show the absurdity of Mr. Garrison/Trump being handed all our military secrets, classified information, and the nuclear football – just as liberals argued before the election. Shockingly, he is shown to be in way over his head.

General: Welcome to the Pentagon, sir. I've been ordered to show you around. This way, please.

Mr. Garrison: So, I can do whatever the [bleep] I want in here now, right?

General: Yes, sir. Here are all our military secrets and all classified information.

General: This is the drone program. In there, you can kill anyone on Earth remotely. Here's the keys.

General: In here is satellite surveillance where you can monitor anyone's conversation live.

Mr. Garrison: Oh, hell yeah, it's necessary. Let's do it.

General: And here, of course, is the famous football, where you can order a nuclear attack in four minutes.

Mr. Garrison: Love me some football.

General: And finally, in here is the diplomatic strategy and negotiating room. [ Alarms beeping ]

Soldier: Thank God you're here, sir. We need your guidance.

The new post-election South Park episodes had to be rewritten because the creators had assumed a Hillary victory, it will be interesting to see what they do with a President Trump in the final two episodes of the show’s 20th season.