In the episode “The Marriage Doctor” of Last Man Standing, Mike Baxter's (Tim Allen) conservative daughter Eve (like father, like daughter) has to prepare for a debate in which – shudder! – she has to take the liberal position. So naturally, she turns to her liberal hippy brother-in-law for some help learning “how to talk out of your ass."

Eve: It's my government class. We have this debate coming up, and my teacher is making us take the opposite side of our political beliefs, which means I have to be a... Liberal. 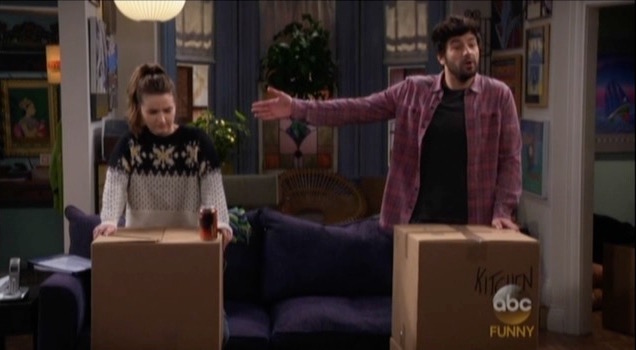 Ryan: It's not a curse word.

Ryan: Well, I could help you if you want. I love the art of stating a thesis and making a cogent argument to support it.

Eve: I know. It's the reason Kristin doesn't have dinner parties anymore.

Ryan: Look, if you really want to prepare, we should have a mock debate.
Eve: That's a good idea. You spew your usual garbage, and I'll mock you.

Ryan: No, because then you'll never learn how to defend a liberal's point of view.

Eve: That's because it has no defense! Zing! How's that for a cogent argument?

Ryan: First sign of a bad argument -- the need for the word "Zing." Look, if you want to win, you got to practice saying what a liberal would say.

Eve: Okay. Hooray for taxes! Give me free stuff! White men suck! You mean like that?

Turns out she’s pretty good at spewing liberal garbage, but not so good at defending it without wanting to puke:

Eve: All right, well, if you're still cool with it, I'd love for you to coach me on some liberal arguments so I don't throw up during the debate.

Ryan: I would be happy to.

Eve: Obamacare is the greatest thing to... No, I can't do it. I'm gonna need a bucket.

In the end, Eve can't bring herself to make the case for liberalism, so she goes for a personal attack on her opponent. Liberal Ryan non-ironically says, "See, that is the problem with conservatives -- they don't debate, they insult," and Mike replies with a joke about the size of his hands. Correction: That is the problem with Donald Trump -- he doesn't debate, he insults. He also talks out of his ass. So Trump is pretty much a liberal. And he's the favorite to win the GOP nomination. I'm gonna need a bucket, too.