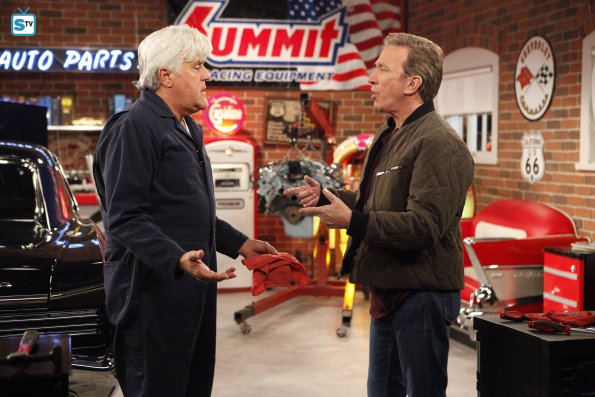 Jay Leno made another cameo appearance on Last Man Standing with Tim Allen, and the two were back to their old hijinks. In the episode “Mike and the Mechanics,” the comedians rip on each other through their characters Mike and Joe, joking about Allen sticking to TV sitcoms and Leno leaving "The Tonight Show," respectively.

Mike: Hey, wait, wait. You actually wanted to be a comedian? Then what's the job you get after that? Like, a talk show host?

Joe: Sure. Why not? You get to talk to beautiful women, you sit behind a desk, and you work, what, an hour a day?

Mike: You're right. That's some kind of job. You'd have to be an idiot to walk away from that kind of job.

Joe: Still better than being stuck on some stupid sitcom.

And, always good for a quick jab at President Obama, Tim Allen ends the episode with this gem:

Mike: So, if you're a young person who's not exactly sure where life is taking you, that's okay. You know, we can't all be Barack Obama and have our first job be president.

It's both funny and sad because it's true!