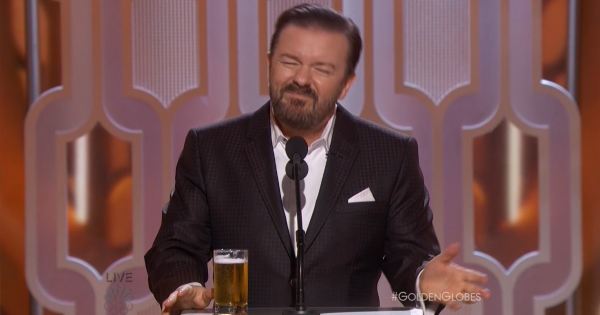 NBC had to know things would be bad when they asked Ricky Gervais to host the 73rd Annual Golden Globe Awards for the fourth time, but did they know it would be THAT awful? Hope your kids weren't watching with you. Gervais literally started the show with the words, “Shut up, you disgusting, pill-popping, sexual-deviant scum” – and it only went downhill from there.

He did a bit about the innuendo of the president of the Hollywood Foreign Press being “an old man pulling me off,” graphically described Jeffrey Tambor’s “huge and long” balls, and said Schindler’s List was funnier than Pixels.

About the movie Spotlight, he said, “The Catholic Church are furious about the film, as it exposes the fact that 5% of all their priests have repeatedly molested children and been allowed to continue to work without punishment. Roman Polanski called it the best date movie ever.”

But things really went off the rails when he went on to talk about the things he does with the Golden Globe next to his bed. And just in case you didn’t get the vulgar innuendo, he clarified, “To be clear, that was a joke about me shoving Golden Globes - that I've won - up my ass.” (Where were the NBC censors on that one? They were on overdrive after that!)

After crossing every possible line he could, Gervais thumbed his nose again at NBC (“The only network with zero nominations," he mocked) and echoed what everyone was thinking, but more crassly, of course, "And they asked me to host four times? Jesus!"

Watch the opening monologue - if you can stomach it.