The 15 Most Racist Words According to ABC’s ‘Scandal’ 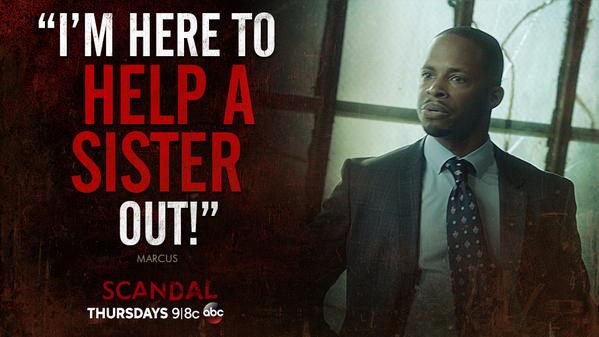 Thursday night’s new Scandal episode, titled “Dog-Whistle Politics,” began as a reenactment of the Monica Lewinsky scandal. It had previously been revealed to the press that main character Olivia Pope was having an affair with the president and the episode has all the same elements -- attacks from the White House on the mistress’s reputation, a First Lady-turned-senator with her eyes set on taking the Oval Office someday, and talks of impeachment -- that we became all too familiar with from 20 years ago.

But then, when Marcus Walker (Cornelius Smith Jr.) is hired to join the Olivia Pope and Associates crisis and public relations firm, the episode takes a turn. This character, who we were first introduced to in a Black Lives Matter themed episode last year, shockingly sees everything through a racist lens. He only agrees to work for the firm “to help a sister out.” Marcus chafes at the fact that the Pope and Associates party line is to ignore the media, but when a reporter calls Olivia “well-spoken,” in the context of her job and how passionately she defends her clients, that’s the final straw! How dare they call a PR professional well-spoken?! THE HORROR!!! It’s not like they called her, as Vice President Joe Biden did of President Barack Obama, “the first mainstream African-American who is articulate and bright and clean.”

-Reporter: Are you gonna respond to allegations?
-Sal: Where is Olivia Pope? When's she coming out of hiding? Just tell us why she won't defend herself as passionately as she defends her clients. She's usually so well-spoken.
-Marcus: [ Sighs ] "For a black woman." "She's usually so well-spoken for a black woman." Isn't that what you meant? I say that because I've been looking at the last 72 hours of your station's news coverage, and when you're not suggesting that Olivia Pope is an angry black woman, you're implying she's a homewrecker who slept her way to the top.

This exchange with the reporter gives Marcus the idea to change the strategy to instead do an all out media blitz and accuse them of using “dog-whistle politics,” which is basically a catch-all phrase that means any word that is used to describe Olivia, is “racism, sexism, anti-semitism, misogyny. It's bigotry in the form of a language so coded that only the person it's targeting is insulted by it”… or only the person who wants to be insulted feels targeted by it.

-Marcus: They're gonna try to confuse you. They will bring up your past criminal record to rattle you. When you get stuck or don't know what to say, just accuse them of playing dog-whistle politics.
-Dan: Now, Quinn Perkins wasn't always your name. Before you started working for Ms. Pope, you were known as Lindsay Dwyer.
-Quinn - The "Molotov mistress." That's what you were going for, right, Dan? But why would you bring that up now when we're supposed to be talking about...
-Marcus: Olivia Pope doesn't fit with the slutty-mistress stereotype. So instead of representing her as she is -- a formidable, passionate advocate -- you take the easy route, shading her, using all manner of coded language. There's a name for that, Claire, and it's...
-Huck: Dog-whistle politics.
-Marcus: That's your buzzword. That's your talking point. Dog-whistle politics.
-Quinn: Yeah, okay, but what exactly is that?
-Marcus: It's racism, sexism, anti-semitism, misogyny. It's bigotry in the form of a language so coded that only the person it's targeting is insulted by it, like a dog whistle. It lets them get away with it.
-Claire: Are you accusing me of using offensive language?
-Marcus: Yes. On this network alone, Olivia Pope has been described as lucky...
-Quinn: ...Sassy, ambitious...
-Marcus: ...Well-spoken, well-mannered, articulate... .
-Quinn: ..Shrill, calculating, overconfident, secretive...
-Marcus: ...Urban, hot-blooded...
-Quinn: ...Known to use thug politics...
-Marcus: ...Arrogant, a siren. Words like these mean nothing to the general public, which is why the media -- and I'm including you in there, Claire -- can get away with using them. But when women of color, like Ms. Pope, hear that kind of coded language, they know exactly what you're getting at.
-Reporter: Well, that's all the time we have tonight. Would you like to add anything else before you go?
-Huck: Dog-whistle politics.
-Reporter: Yes. You've said that a few times now.

Huck betrays how ridiculous this scene is by simply parroting the talking point “dog-whistle politics” at the end.

Just take a look at this list of 15 words or phrases they claim are racist dog-whistles:

If you don’t hear racist code language in a word like “secretive,” well, you must not be the target and you must be a racist! Maybe it would be easier if they listed words that were NOT bigoted.

And of course it wouldn’t be enough to talk about the media being racist, they have to hit the Republican Party, too. In a scene where Republican members of the Senate majority meet with the (supposedly) Republican President Grant to work out a deal so he isn’t impeached, one senator tells him that next time he wants to have an affair to pick a white woman.

-Senator: Next time you decide to go outside your marriage, choose yourself a girl who's a little more palatable to the base.
-President: What is that supposed to mean?

Obviously, it’s supposed to mean the Republican base is racist, Fitz! In Shondaland, every Republican is ipso facto racist, except for the progressive “Republican” Grant Administration, whose top political achievements include passing an equal pay bill and the “Brandon Bill,” which was a law enacted after the police shooting of an unarmed black man.

In this episode, from phantom racist code words like "lucky" and "ambitious," to more overt implications that the GOP base is racist, [cue The Lego Movie song] everything is racist!