Teen Vogue Wants Your Kids to Be 'Democratic Socialists' 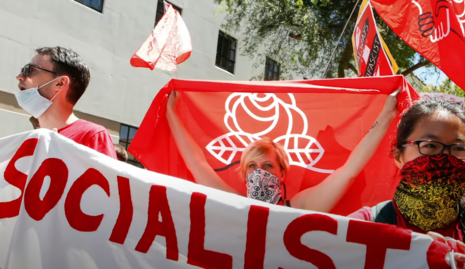 The indoctrination of our youth begins with media sites like Teen Vogue that are now publishing articles with the purpose of encouraging young adults to become part of Democratic Socialists of America. The organization name is an oxymoron in itself but the morons who are pushing this don’t care about the consequences that come from a radicalized nation. According to this new article, “there is no future under capitalism” and it is “a system of profit and exploitation.”

It sounds absolutely ridiculous to those who have studied the history of socialism and how it quickly morphs into communist dictatorship and fascism. The truth is that Generation Z has grown up in a time of peace for the United States and are the most prosperous and privileged people in the world because of capitalism. The GDP per capita for the largest economies in the world quickly reveals the superiority of capitalism in promoting wealth for all citizens.

The author of this Teen Vogue article, Calla Walsh, wrote, "As the youngest delegate at this week's Democratic Socialists of America (DSA) National Convention, I urge members of my generation to mobilize toward building a socialist future."

Claiming, "Gen Z faces a unique set of conditions that make us especially open to ideological radicalization," she based her arguments on the high percentage of minimum wage workers being between the ages of 16-24, youth unemployment, and "[t]he expansion of the academic industrial complex and the resulting student debt crisis."

She fingered "capitalism as the root cause of the climate crisis" because it is a “system of profit and exploitation” that “is driving our planet into literal inhabitability.”

No other crisis in our history has posed such an existential threat and moral obligation for radical change in our economic and political systems. Human survival will depend on revolution.

If that is the case then shouldn’t they be leading a revolt against China instead? China does not have a capitalist economy and yet they contribute the greatest share of greenhouse gas emissions in the world. China and India both outpace the US in coal consumption, as well. But, sure, let’s blame capitalism.

“Organizing won’t be driven just by a desire to improve our quality of life, but by an impulse to save the human race,” the article continued. This is grade A fear mongering. The author goes on to discuss how the “climate crisis” is forcing people into “survival mode.” You know what they say about making assumptions.

In truth, the deaths due to natural disasters has not only decreased in the US over the past 100 years, it has also decreased around the world. In 1900, there were around 1.2 millions deaths caused by all natural disasters, in 2019 that number was 11,719.

It is not only the ‘climate crisis’ that has been caused by capitalism, however, the author further claimed that "the struggles to end white supremacy and capitalism are intertwined."

If we, the generation whose souls have not yet been crushed by capitalism, choose to use these tools, we can shift the tide in favor of socialism — the only system that will guarantee us a livable planet and life unburdened from economic exploitation, crushing debt, and racial castes.

This is extreme ignorance. Pakistan, North Korea, Russia, the Democratic Republic of the Congo and China all still have slavery.

Capitalism is and has always been the most fair economic system to exist. If Gen Z is really to be the “saviors” of this country then we must educate ourselves on history and stop falling for the socialist lies.