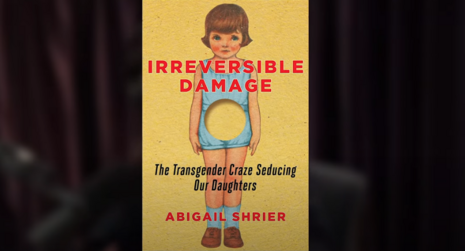 Abigail Shrier’s book, Irreversible Damage: The Transgender Craze Seducing Our Daughters came out in mid-2020 and the left was instantly triggered (of course). The American Booksellers Association (ABA) is now apologizing for including the book in its “White Box.”

Shrier, who's written the Wall Street Journal, had an instant hit as her book discussed the “trans epidemic” and how society encourages “transitioners.” She interviewed young girls, their parents, counselors and doctors who had encouraged or went through gender transition surgery. She also interviewed women who greatly regret mutilating their bodies -- women she calls “detransitioners.”

The book has upset many progressives. Two Amazon employees have now resigned in protest of the company's decision to keep selling the book because it “frames young people who identify as transgender as mentally ill.” Shrier shared this on Twitter after the story broke:

The ABA sends out a “White Box” every couple months to some of its member stores. This box usually includes advanced copies of books, some finished books that are popular and other promotional materials. This month, the ABA decided to include Shrier’s book in the package.

Angry lefty Casey Morrissey then tweeted about the book, saying that she was “seething” after finding it in her box. “Do you know how that feels, as a trans bookseller and book buyer? It isn’t even a new title, so it really caught me in the gut,” she said. “Do better.”

The ABA spokesteam has not released a statement on how the book came to be included but it’s definitely a book that everyone should read, especially today. The ABA did release a statement on their Twitter account (which was changed to private following the controversy) saying:

This is a serious, violent incident that goes against ABA’s ends policies, values, and everything we believe and support. It is inexcusable. Apologies are not enough. We’ve begun addressing this today and are committed to engaging in the critical dialogue needed to inform concrete steps to address the harm we caused.

Shrier responded yet again with a strong statement:

The book-banning Left is a totalitarian movement.

It has no use for an open, liberal society with a broad diversity of viewpoints, and it will use shame, fear, and coercion to win.

It can't be harmonized with Liberalism. https://t.co/rQMdPcZDFC

Chad Greene, an American author and LGBT activist, stood up for Shrier. “I am a gay and trans person and @AbigailShrier's book tells the stories of trans people like me.” He wrote, “You are supporting the erasure of trans voices like mine by allowing bullies to censor speech they don't like.”

This week we did horrific harm when we included an anti-trans book in ABA’s July box mailing to members. Last week, we did terrible and racist harm when featuring the bestseller ‘Blackout’ by Dhonielle Clayton, Tiffany D. Jackson, Nic Stone, Angie Thomas, Ashley Woodfolk, and Nicola Yoon with the wrong cover image, conflating it with an image of the cover of a book by a different Black author, a right-wing extremist.”

She is referencing Candace Owens, who used to be a Democrat.

The leftists will scream and yell and censor anything that they slightly disagree with. But Shrier’s book was still named Book of the Year by The Economist and One of the Best Books of 2021 by The Times and The Sunday Times. Joe Rogan also interviewed her on his podcast.