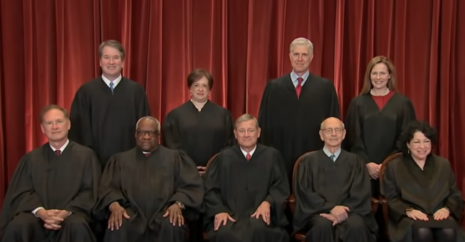 The Supreme Court has just granted a major win for the state of Arizona and election integrity for the country. In the case of Brnovich v. Democratic National Committee, the court ruled 6-3 that Arizona did not violate the Voting Rights Act of 1965 by prohibiting ballot harvesting and having laws that prevented citizens from voting outside of their precinct on election day. The woke lefties who make up the opposing side have been screaming all morning about this decision because it is "suppressive.”

You read that right, supporting election security and wanting to ensure that our votes count is a 'suppressive' action.

American actor and filmmaker, Rob "Meathead" Reiner, wrote in a tweet that “Access to the ballot box is being threatened” and “Democracy is on the line.” Although, we don’t live in a democracy so he’s obviously confused about more than just our country’s voting system.

Another “pro-democracy” lefty, Joy Reid, felt that her two cents were needed as well. She never misses an opportunity to embarrass herself by discussing topics that she has no real knowledge of. She attempted to come after conservatives yet again with this tweet:

We may not have a Voting Rights Act soon, y’all. These right wingers on SCOTUS are eventually gonna come for all of it.

Election law attorney and founder of Democracy Docket, Marc E. Elias was obviously upset by the decision. His “progressive platform” is constantly making up stories about how racist America’s voting laws are. He’s more obsessed with pushing a left-wing agenda than he is with actually understanding the law that he supposedly practices. If a Republican tweeted this, he would be considered an ‘insurrectionist.’

If anyone thinks that this decision will stop us from fighting for voting rights, they are wrong. We will fight harder with every tool available to protect voters from suppressive laws. https://t.co/DIWSczfa5S

The Former US Acting Solicitor General, Neal Katyal, joined in on the SCOTUS hate as well, saying in a tweet: “Bad news for Voting Rights Act. Supreme Court has weakened it even further. Congress must act.” And he calls himself an “extremist centrist.”

The way-far left didn't take it well, either. Mother Jones writer Ari Berman had an equally ridiculous tweet, saying “SCOTUS conservative majority is quite literally making it easier to buy an election and harder to vote in one.” Something doesn't add up here. Let's not forget that Lyndon B. Johnson was a Democrat, and his election rigging is proven.

We can’t forget about this gem from The Nation’s justice correspondent Elie Mystal:

I would like very much for all the "apolitical SCOTUS" people to line up in a thread below this tweet and kiss my entire black ass.

Very classy Mystal. He also tweeted out "Expand the court or you get nothing," just three minutes earlier. I'm surprised he doesn't work for CNN after seeing these comments.

Asking leftists to respect the Supreme Court is equivalent to asking them to respect the Constitution. Never gonna happen (unless it's in their favor of course).