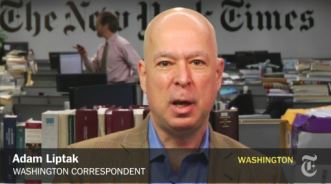 New York Times Supreme Court reporter Adam Liptak weighed in on two Supreme Court decisions on Tuesday's front page. One was a case ruling, favorable to many conservatives, that upheld Oklahoma's drug-based method of executions. The other was a decision, also amenable to conservatives, to take up a case challenging the University of Texas' affirmative action policy. Yet in both stories, Liptak led off with the liberal argument.

In the Oklahoma execution decision, which went 5-4, with Justice Anthony Kennedy siding with court conservatives, Liptak led off with the view of two liberal justices who want capital punishment interpreted as unconstitutional (never mind the 5th Amendment). The Times even worked that dissent into the headline: "Justices Approve Execution Drug In A 5-To-4 Vote – Two in Dissent Question Constitutionality of the Death Penalty."

Of LIptak's first 12 paragraphs, only one dealt with the winning conservative side, while Liptak devoted eight to the liberal dissents, including the two potential abolitionists, Justice Breyer and Justice Ginsburg

The Supreme Court ruled on Monday against three death row inmates who had sought to bar the use of an execution drug they said risked causing excruciating pain.

In the process, two dissenting members of the court -- Justices Stephen G. Breyer and Ruth Bader Ginsburg -- came very close to announcing that they were ready to rule the death penalty unconstitutional. This gave rise to slashing debate with Justices Antonin Scalia and Clarence Thomas about the reliability and effectiveness of the punishment, a dispute that overshadowed the core issue in the case.

In a second, more sweeping dissent, Justice Breyer, joined by Justice Ginsburg, said it was time to consider a larger issue.

“Rather than try to patch up the death penalty’s legal wounds one at a time,” Justice Breyer wrote, “I would ask for full briefing on a more basic question: whether the death penalty violates the Constitution.”

In a 46-page dissent that included charts and maps, he said that “it is highly likely that the death penalty violates the Eighth Amendment,” which bars cruel and unusual punishments. He said that there was evidence that innocent people have been executed, that death row exonerations were frequent, that death sentences were imposed arbitrarily and that the capital justice system was warped by racial discrimination and politics.

Justice Breyer added that there was scant reason to think that the death penalty deterred crime and that long delays between death sentences and executions might themselves violate the Eighth Amendment. He noted that most of the country did not use the death penalty and that the United States was an international outlier in embracing it.

In his other front-page Supreme Court story, Liptak employed a dismissive tone against "white woman" Abigail Fisher, who is challenging the University of Texas' affirmative action policy: "Supreme Court To Weight Race In Admissions – Revives Texas Case on Affirmative Action."

The Supreme Court agreed on Monday to take a second look at the use of race in admissions decisions by the University of Texas at Austin, reviving a potent challenge to affirmative action in higher education.

The move, which supporters of race-conscious admissions programs called baffling and ominous, signaled that the court may limit or even end such affirmative action. The advocates speculated that the court’s most conservative members had cast the four votes needed to grant review of the case in the hope that Justice Anthony M. Kennedy would supply the fifth vote to strike down the Texas admissions plan.

The Times apparently saw no positives to the end of racial preferences or in having more Asian-Americans accepted into quality colleges.

The consequences would be striking if the court sided with the plaintiff in the case, a white woman named Abigail Fisher, and did away with racial preferences in higher education. It would, all sides agree, reduce the number of black and Latino students at nearly every selective college and graduate school, with more Asian-American and white students gaining entrance instead.

“Over the last few days, liberals have been celebrating a string of important victories involving health care and same-sex marriage,” said Justin Driver, a law professor at the University of Chicago. “But liberals have also been bracing themselves for the other shoe to drop. This decision to grant review means, at a minimum, that the other shoe will remain suspended in midair for the next several months.”

A decision barring the use of race in admissions would undo a 2003 ruling that the majority said it expected to last for 25 years. In that 5-to-4 decision, in Grutter v. Bollinger, the Supreme Court said that public colleges and universities could not use a point system to increase minority enrollment but could take race into account in vaguer ways to ensure academic diversity.

Liptak often leads off with the losing liberal viewpoint in his Supreme Court coverage. In an April 2014 lead story after the Court voted 6-2 to uphold Michigan's ban on affirmative action, Liptak led with Justice Sonia Sotomayor's "most passionate and most significant dissent of her career."