Donald Trump’s rise as a presidential candidate has prompted many political observers to blame TV outlets for giving him historic amounts of free air time. While it’s true the media have overwhelmingly focused on Trump in their coverage during the current election cycle, there is another media phenomenon at play. NBC has spent more than a decade building his brand as a successful businessman of almost mythic proportion.

The network’s coverage of Trump was overwhelmingly and consistently positive. MRC Business found only 15 stories (out of 335) on Trump’s business failures, and 320 stories promoting him as a businessman, his businesses and his shows. The vast majority of stories were about the network’s show The Apprentice, which featured Trump. 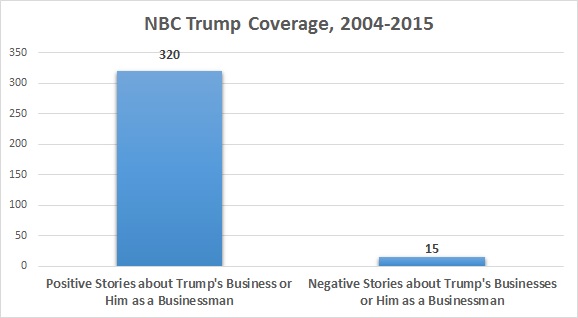 During the period of 2004-2015, NBC had two partnerships with The Donald -- his hit reality TV show and Miss Universe, which also included Miss USA and Miss Teen USA. NBC News’s Today served as a de facto PR machine for The Apprentice and its star. Today anchors interviewed fired contestants, presented Trump as “the ultimate businessman,” and even “fired” NBC interns on a mock Apprentice called The Intern. Today also made Trump into a career savior after his “divine intervention,” as host Matt Lauer put it, allowed a scandal-plagued Miss USA to retain her crown.

NBC’s relationship with Trump was mutually beneficial, and fraught with ethical problems. Even when the network covered The Donald’s business shortcomings, NBC failed to disclose its business partnerships with him. NBC also outright advertised (complete with prices) his and his daughter Ivanka’s businesses, and engaged in activities that jeopardized its credibility as an impartial news organization. For example, NBC donated more than $500,000 to Trump’s foundation, and filmed episodes of Today from Trump venues.

Before the 2012 presidential election, NBC boosted Trump as a presidential candidate and depicted him as a political “power broker.” Access Hollywood anchor Billy Bush took Trump to the polls way back in 2004 and described him as, “The next President of the United States Donald Trump.” After a man asked Trump about running for president, Bush shouted, “Write him in,” and later asked a poll worker how many people were writing-in Trump on their ballots. Bush even told a man that while his vote was just “one vote,” Trump’s vote was “giant.” MRC Business studied NBC coverage of Trump from 2004-2015, and found: