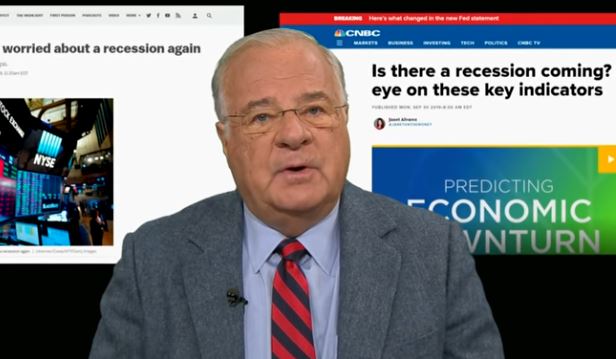 The liberal media routinely warn that America is headed for a recession, but what is to blame?

Liberal sources like The New York Times offering “How the Recession of 2020 Could Happen,” CNBC’s “Is there a recession coming? Keep an eye on these key indicators,” and Vox’s “Why everybody’s worried about a recession again” and “Recessions, and the fear that another one is just around the corner, explained,” to name a few, are indeed warning of a possible recession.

Joe Ricketts, Founder and former CEO/Chairman of Ameritrade and author of The Harder You Work, the Luckier You Get: An Entrepreneur’s Memoir, addressed the liberal media concerns and predicted that “a recession is coming,” reported CBS News Sunday Morning.

Right now, there is a philosophical battle raging over our economic system in which free enterprise has been “seen as the province of conservatives, while liberals praise something more like socialism,” suggested Ricketts.

And his “progressive-liberal friends worry that free enterprise” is to blame because it produces inequality, that somehow there is a “big pot of money” with only the question of how this pot of money is to be divided.

But this pot, continued Ricketts, “comes from a growing economy and job opportunities;” it “comes from free enterprise.”

“We need to change the conversation we’re having about the American economy,” stated Ricketts. And we need to teach our children the importance of finding opportunities and taking risks because some of them will need to start businesses that create good jobs.

“You don’t repair a car by throwing out the engine,” explained Ricketts. “Free enterprise is the engine of success for us all.”