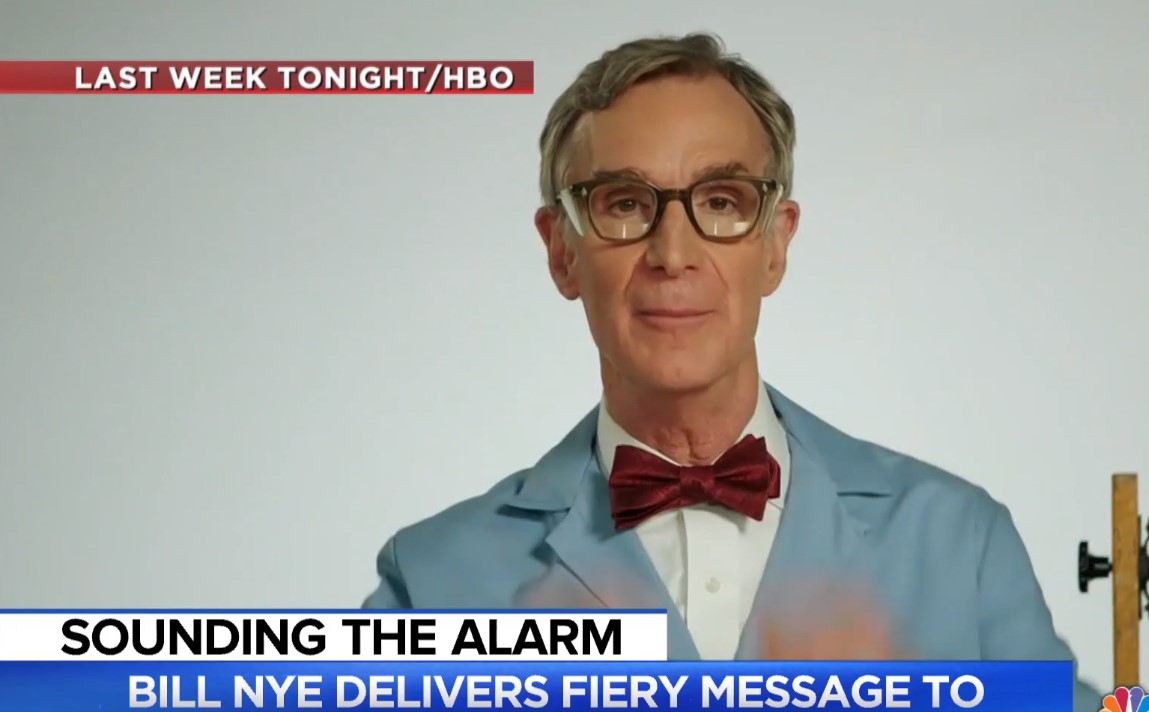 It’s hard to follow a stunt like setting a globe aflame and proclaiming the world is “on fucking fire” because of global warming, but Bill Nye “The Science Guy” managed in it a CNN podcast interview.

With less theater and showmanship than his “heartfelt,” expletive-laden performance on HBO’s Last Week Tonight, Nye still made outrageous claims about natural disasters and global warming on Brian Stelter’s Reliable Sources podcast May 30.

Just days after Memorial Day, when veterans are remembered for giving their lives in battle, Nye nonchalantly claimed there is a “Pearl Harbor” moment on climate change every week — but is only being recognized by his side: “the science side.”

The actual act of war at Pearl Harbor killed 2,403 people, and led to the U.S. declaration of war. Yet, he considered this an apt metaphor for natural disasters he claims are fueled by human-induced climate change.

“We don’t have Pearl Harbor, by analogy. We never had this catastr—- people from the U.S. were fighting the war in Europe. They were flying missions since the late 1930s. Flying bombing runs. But it wasn’t until Pearl Harbor where everybody really got serious about winning,” Nye said. He failed to specify that Americans who fought the Axis ahead of Dec. 8, 1941, did so as voluntary and private citizens. War was not declared until after the Pearl Harbor attack.

He continued, “But the trouble with climate change is it's happening in slow motion.”

“So there will never be a Pearl Harbor moment?” Stelter asked.

“Well, for us there’s one every week. And so, for us on the science side,” Nye insisted.

Stelter asked for clarification, and Nye went on.

“There’s a flood, there’s a drought, there’s a fire. There are refugees displaced by, in some cases, by the hundreds of thousands or millions. That happens every week. And as we like to say on our side of it, the science side: ‘Just think if all these things were happening and we didn’t know why. That would really be scary, right?”

“These floods, tornadoes in April and March that didn’t used to happen, what if that were all happening and we didn’t have an explanation for it? That would be very troubling,” Nye insisted.

Floods and tornadoes are not new. Not even April ones. Minnesota experienced “record” flooding in April 1965, when three major rivers flooded after the winter snow melted, Minnesota’s Department of Natural Resources said.

Some of the worst floods in history happened many years ago including the Johnstown Flood in Pennsylvania in 1889, Europe’s “great drowning of men” in 1362, and a devastating flood in the Indus River Valley in 1841, according to History.com. That didn’t even list “Great Flood of 1844” that struck Kansas City or the “Great Flood of 1862” that affected Oregon, Nevada and California.

Both devastating weather patterns have been documented for centuries. The first recorded tornado in the U.S. is believed to have been in 1643 in Massachusetts.

AccuWeather extreme meteorologist Reed Timmer said the 2019 tornado season is “unusual” in its “persistence,” but not unheard of, according to KTVB.com. The AccuWeather website says the “prime months for tornadoes are from March to July,” although they can happen year-round.

Stelter’s podcast interivew also included plenty of bashing of “climate denial” and "deniers," promotion of Nye’s own new podcast Science Rules, and a discussion about UFOs.