WashPost Mag: All In for Earth Day with 48 Climate Change Pages 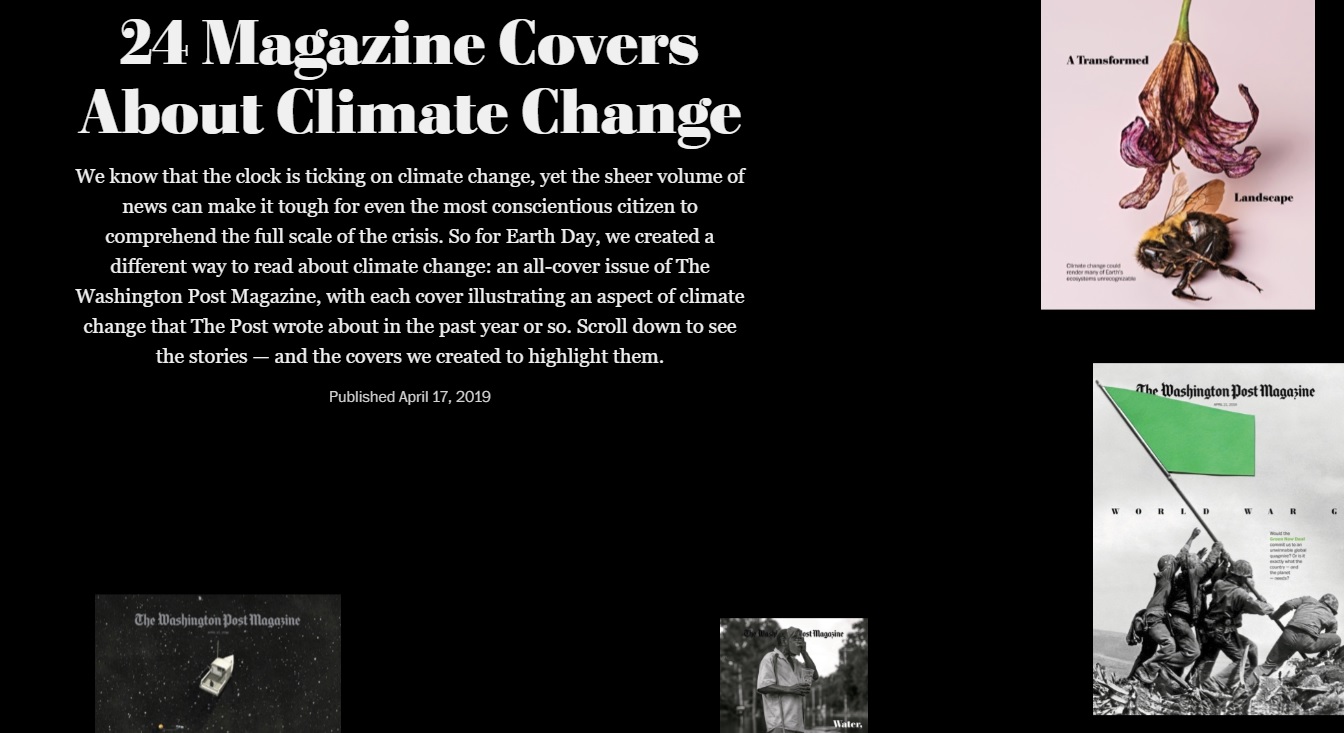 This Earth Day The Washington Post Magazine used images of burning globes, an illustration of sea levels so high modern apartments resemble Atlantis, and a photo illustration of Marines raising a green flag over Iwo Jima.

And that was just three of the 24 separate magazine covers included in the magazine’s April 21 edition — all focused on climate change alarmism. Out of 51 pages including the front and back covers of the April 21 issue, climate change-themed images or articles were on 48 pages.

That’s what you call “all in.”

It wanted to provide a “different way to read — and think — about the peril facing Earth. So the issue came with 24 separate magazine covers because “a successful cover elevates the importance of an article; it finds a way to grab your attention; it persuades you to learn more about the topic at hand. Each of the climate change stories excerpted in this issue is, we believe, worthy of its own magazine cover.”

The “World War G” cover with excerpts about the Green New Deal showed Joe Rosenthal’s famous image of Marines raising the American flag on Iwo Jima, but instead of an American flag, it featured a big solid green, poorly designed polygon.

Time magazine outraged veterans when it did something similar on a cover in 2008 — using the Iwo Jima image, but showed the Marines hoisting a tree instead of the American flag.

At least in the case of the Green New Deal, the Post Magazine included excerpts of an argument for and against it. That was the closest the entire issue came to balance on climate change.

Two covers addressed hurricanes, including “CATEGORY SIX? Hurricanes are going to get worse. And we might need a new way to label them.” Another asked “Did climate change make Hurricane Florence worse?” Then there was the excerpt claiming that it was “probably somewhat larger and dumped more rain than it would have if the same storm had arrived in a world without humans’ greenhouse gas emissions in the atmosphere.”

Of course, that expert didn’t acknowledge the 11 years without major hurricane landfalls in the U.S. that happened prior to 2017 even as alarmists were predicting hurricanes would become stronger and more frequent because of global warming.

Climatologist Roy Spencer has often thrown cold water on attempts to blame hurricane behavior on global warming, and Florence was no exception. His USA Today op-ed said that Florence is “likely due to natural weather patterns, not climate change.”

“Any changes in hurricanes over 70 years, even if real, can easily be part of natural cycles — or incomplete data,” he added. Spencer also noted that strange things do happen naturally, like a hurricane with a 20-foot storm surge in Massachusetts in 1635.