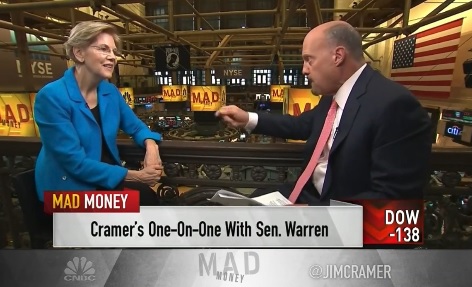 Far-left Democratic Sen. Elizabeth Warren has a new plan to regulate the largest businesses and some in the media helped promote it.

She published a Wall Street Journal op-ed about her new legislation, the “Accountable Capitalism Act,” on Aug. 14. The very next day, Mad Money host Jim Cramer interviewed Warren about her “Novel way to reward the stakeholders of the enterprise.” He also called the op-ed “incredibly provocative.”

Warren argued that corporations shifted the way they did business beginning in the 1980s to only focusing on returns for shareholders and that, in her view, was a terrible thing. Now she wants the government to intervene and prevent it.

“My proposal says lets get a little accountability into the system. And let’s get these corporations to charter federally — the ones that have more than $1 billion of sales every year,” Warren told Cramer.

Her proposed mandates (of course, she called them “features”) included requiring employees to elect 40 percent of the board of directors and changes to CEO compensation structure.

Cramer prefaced his challenging question with “Devil’s advocate,” before asking, “If your bill passes we know the way capitalism can work, it can be a little rogue. Would some companies say ‘tax on jobs. We’ll just outsource. Tax on jobs, we’ll hire temporary workers’? How do you get around that?”

He let Warren ignore that criticism (that regulations act as a tax and change behavior) claiming, “No, no this doesn’t change anything. Let’s be clear. This is no new taxes and I wanna be really, really clear, doesn’t cost the American taxpayer a single penny.”

Wrong. Regulations always have costs that are passed on in some way (stagnation, or slower growth, lower profit, even business failure.)

Warren insisted “It’s not anti-business,” while admitting she wants to not only tell businesses what they “need” to do, but compel them through legislation.

Cramer hinted at the free market criticism by asking again, “Why do we need legislation when the examples [such as Cosco and Salesforce] of great stocks that actually embrace their workers are so evidence?”

“I get it, the problem we’ve got is we need to level the playing field.” Warren insisted.

Conservative and libertarian pushback was far more severe. Reason’s blog declared that, “Elizabeth Warren Plans to Destroy Capitalism By Pretending to ‘Save’ It.”

The post also noted that her plan “would overrule corporate leaders’ control over their businesses” — reminding readers that’s called “socialism.”

Reason provided more specifics about Warren’s bill including its impact on corporations that earn over $1 billion in revenue “not ‘profits’” and requiring they have a federal “charter” to operate.

She “wants to essentially force these companies to use the ‘benefit corporation’ model, which prizes a set of values above just profits,” and “to substitute the decisions of people who run businesses with the prejudices and preferences of people who think like she does,” Reason’s associate editor Scott Shackford concluded.