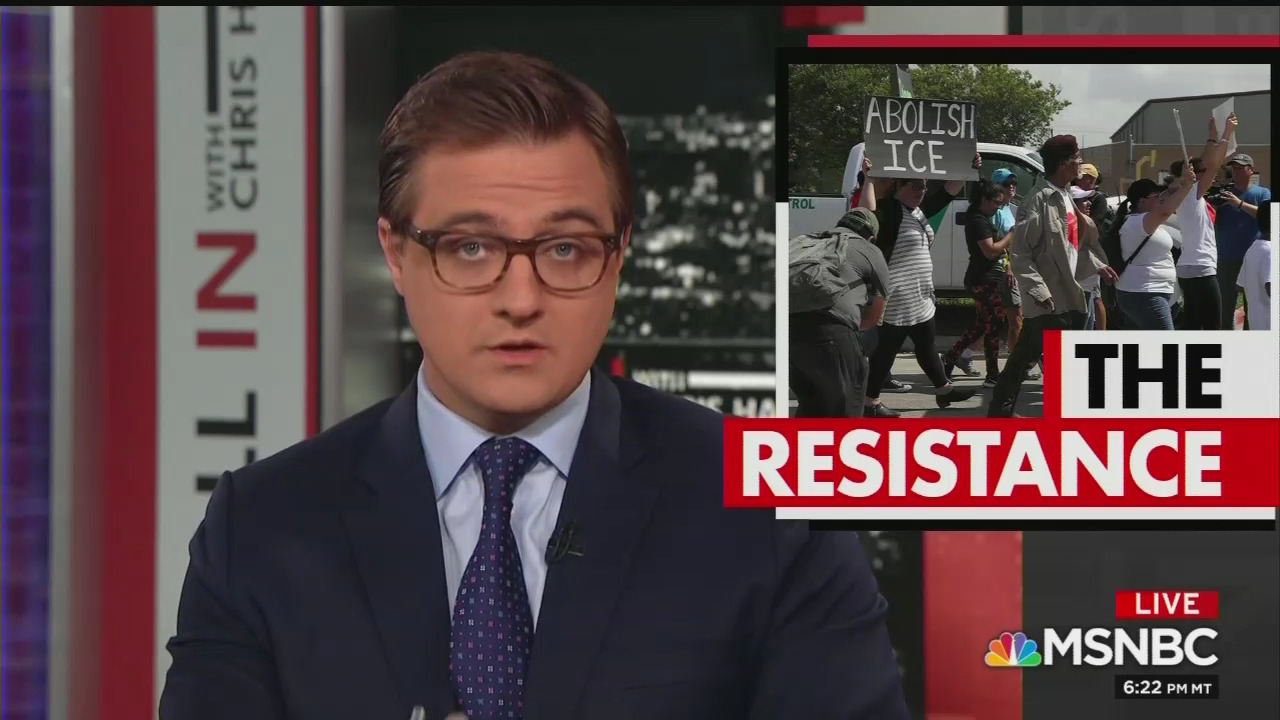 It’s clear from MSNBC anchor Chris Hayes’s twitter feed, he was unhappy with the Supreme Court decision that limited the power of public sector unions.

The Supreme Court ruled 5-4 in favor of Mark Janus, a public employee who took his union to court, in the Janus v. AFSCME case. Janus claimed being required to pay fees amounted to “compelled speech” because public sector unions are inherently political. In a June 27, 2018, decision the court agreed that employees of public sector unions should not have to pay such “fair share” fees because it violates their First Amendment rights.

Huffington Post reported that it will impact 5 million public sector jobs in 22 states and Washington, D.C., but admitted that unions are big Democratic political players. The ruling infuriated labor unions and upset many liberals including Hayes. It also caused progressives at The Nation to suddenly complain that the Supreme Court had become political, as if court rulings the left embraces are any less “political.” 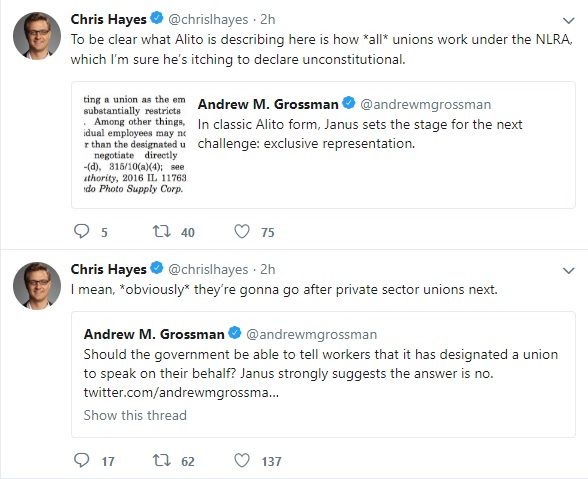 Hayes reacted by tweeting, “I mean *obviously* the’re gonna go after private sector unions next” and “To be clear what [Judge] Alito is describing here is how *all* unions work under the NLRA, which I’m sure he is itching to declare unconstitutional.”

He also retweeted a section of liberal Justice Elana Kagan’s dissent which included the line “The First Amendment was meant for better things.”

After losing the case, AFSCME tweeted that the court “sides with billionaires” and circulated a petition encouraging people to “Say you’ll never allow the special interests behind this case bust your union.”

The National Conference of Democratic Mayors tweeted out a joint statement with public sector unions AFSCME, SEIU, AFT and NEA, claiming it was a ruling “against working people and in favor of billionaire CEOs and corporate interests ...” In it, AFT president Randi Weingarten called it a “dark day in U.S. jurisprudence."

Another union, the AFL-CIO tweeted, “BREAKING: The Supreme Court just joined the corporate attack on working people, but we won’t sit quietly. #janus Join us: freedomtojoin.org.”

Bryce Covert, a contributor to the progressive magazine The Nation and contributing op-ed writer for The New York Times, reacted to the case in a Times op-ed arguing that workers need to “get radical to fight back” against the decision.

“Working Americans must now get radical to get heard,” Covert wrote. With union “clout” already on the decline and the Janus ruling,” Workers will have to reconstruction this countervailing power and find new ways to build solidarity. We’re going to have to get bold again.”

As examples, she praised recent teachers’ strikes and the Fight for 15 protest movement’s strategies (including confrontation and civil disobedience).

Huffington Post was honest about the ruling’s impact on liberals, acknowledging “Unions are a pillar of the Democratic Party, steering money to labor-friendly candidates and helping to run Democratic ground games during campaigns. Janus may force some unions to cut back on political spending as they steer resources toward maintaining their membership levels.”

Obviously, conservatives reacted far differently. National Review called it a “blow for Freedom” and pooh-poohed liberal wailing that this will “defund and destroy” unions entirely.

“The case addresses an individual’s constitutional protection from coerced speech. It doesn’t deny unions the right to organize, recruit, bargain, strike, or collect dues from willing members. What it does deny is the unions’ right to force individuals who are opposed to their positions and policies to pay into union coffers.”