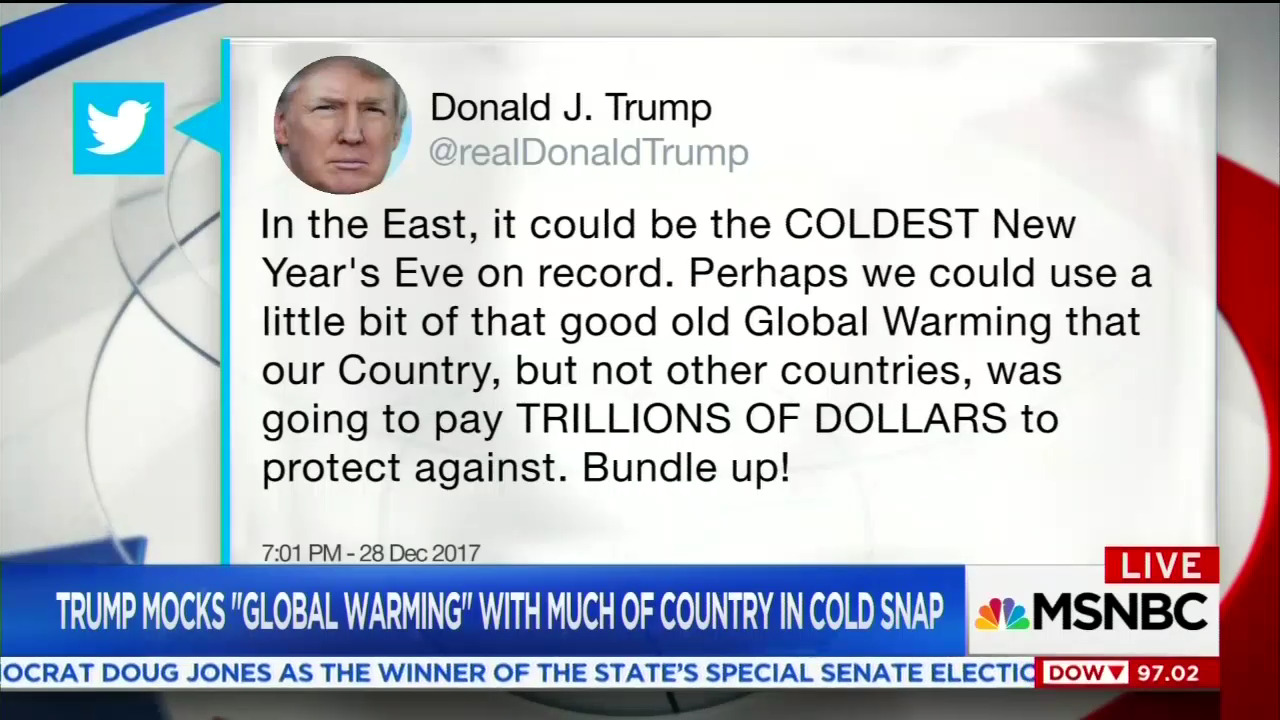 As much of the U.S. shivers under extreme cold, the liberal media lashed out at President Donald Trump over a tweet about global warming, portraying him as stupid or confused about the difference between weather and climate.

Trump had tweeted, “In the East, it could be the COLDEST New Year’s Eve on record. Perhaps we could use a little bit of that good old Global Warming that our Country, but not other countries, was going to pay TRILLIONS OF DOLLARS to protect against. Bundle up!”

Liberal media responses showed their hypocrisy when it comes to bringing up weather in the context of climate change. While they attacked Trump over his tweet, there are plenty of examples of them doing exactly what Trump had done — claiming weather events were proof of a global warming problem.

Esquire derided the president with the headline, “Local Golf Fanatic Doesn’t Know the Difference Between Weather and Climate.” Weather.com mocked Trump for “proving once again he doesn’t understand the difference between climate and the weather.” That article went on to claim “cold snaps in the East have been linked to global warming.”

Kendra Pierre-Louis wrote in The New York Times Dec. 28, “ ... Trump took to Twitter on Thursday to cast doubt on the reality of climate change, but he appeared unaware of the distinction between weather and climate.” Vox blared “Trump thinks climate change isn’t real because it’s cold out. This map proves him wrong.”

Of course weather isn’t climate. But the media only point it out to attack climate skeptics and they often cite weather events as proof of climate change. In 2017, liberal media brought up climate change during Hurricane Harvey and Irma coverage, just as they’d tried to blame Hurricane Sandy and others on global warming in the past.

Then the minute anyone issues a counterattack, even in jest, over frigid temperatures they suddenly seem to remember weather isn’t actually the same as climate.

In 2014, the news media also tried to ward off any skepticism the frigid temperatures might cause, turning to experts who declared “You can’t look at a single event to prove or disprove global warming.”

In 2010, Sen. James Inhofe of Oklahoma and his kids built an igloo in Washington, D.C. mocking Al Gore and global warming alarmism. They were attacked by many including Daily Kos which called them “Iglooramuses,” and inclusion by Rolling Stone in a list of the “dumbest things ever said about global warming.”