Naomi Klein: Fossil Fuel Companies Should be ‘In the Dock’ over Climate Chaos 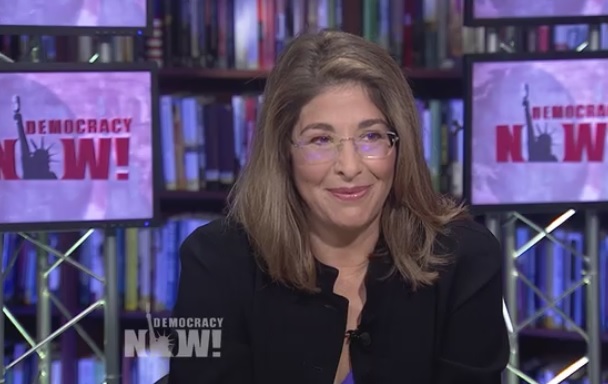 Liberal activist Naomi Klein blamed oil and coal companies for the devastation of Hurricane Harvey and Hurricane Irma and called for their prosecution in a recent interview.

Klein appeared on the left-wing Democracy Now! program on Sept. 18, and complained about the supposed “world of extremes” she says is taking place because of a “warmer world.” Democracy Now! is funded by liberal donors including Rockefeller Philanthropy Advisers and Tides Foundation.

Host Amy Goodman specifically asked Klein about the appointment of former Shell Oil president Marvin Odum as Houston’s chief recovery officer following Hurricane Harvey. After ranting at length against fossil fuel companies, Klein argued they should all be “in the dock” — in other words: prosecuted in a court of law.

Klein blamed “deregulated” fossil fuel companies for helping turn Harvey “from a disaster to a catastrophe” and making the storm stronger.

“So, the oil and gas industry is intensifying the impacts of the storm locally, on the—because of what the industry is doing in a city like Houston, and then globally, because of the cumulative impacts of burning all of those fossil fuels,” Klein told Goodman.

“And then, who is in charge of the reconstruction but a former president of Shell Oil, one of the oil majors that we now know—we can trace—you know, we know how much of global emissions, more or less, come from that handful of fossil fuel majors,” she claimed. “They should be in the dock, and not in charge. And here, I’m talking about Exxon and Shell and BP, and the core company, and, of course, the coal industry, that have so intensified this disaster.”

Prior speeches and television appearances make it obvious Klein is an anti-capitalist agitator who sees climate change action and a post-carbon economy the way to make the economy more “equitable.” She once claimed on MSNBC that China was not “communist,” and has called President Donald Trump an “idiot.”

Her call to prosecute the fossil fuel industry was reminiscent of Democratic Sen. Sheldon Whitehouse’s calls in 2015 to use racketeering laws (RICO) over a so-called “climate denial operation.” Other lefties have also called for the criminalization of skepticism over global warming alarmism including one editor from Vice Media. Vice’s outlet Motherboard declared “Climate change denial should be a crime,” because of Hurricane Harvey.