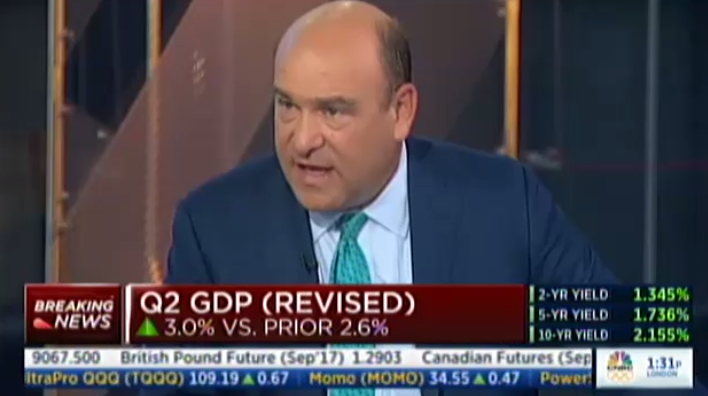 The government estimated that the U.S. grew at an annual rate of 3 percent in the second quarter. That was significantly higher than the 2.7 percent expected.

The good economic news was heralded as “impressive,” a “substantial acceleration” over the first quarter, “rosy,” and “without question good news for the economy.” But not by ABC, CBS and NBC evening news programs, nor their counterparts on Spanish-language networks Univision and Telemundo.

None of those programs mentioned the Bureau of Economic Analysis’s estimate of second quarter growth on Aug. 30. NBC Nightly News found time to point out that men are becoming fathers later in life.

It is hard to see how that story was more imperative than an update on how the U.S. economy is doing — especially since many people voted for President Donald Trump because of their economic concerns.

Coverage of Hurricane Harvey and its aftermath naturally dominated network coverage, but what even the liberal Washington Post described as “the strongest quarterly growth for the United States in more than two years” should have gotten attention from each network.

World News with David Muir also covered tensions with North Korea, the new cancer treatment, Republican Sen. John McCain’s upcoming return to Capitol Hill following a round of chemotherapy for his brain cancer, and a shootout in Sacramento, California, which wounded police officers and the suspect.

The New York Times, Washington Post, CNBC (in broadcasts and online), Business Insider and all reported the news on Aug. 30, the same day as the BEA announcement.

CNBC reported that in addition to the greater than expected growth, “there are signs that the momentum was sustained at the start of the third quarter” driven by the fastest consumer spending in a year, as well as an uptick in business spending.

While some quarterly growth estimates under Obama topped 3 percent, the U.S. economy did not grow at a 3 percent rate on an annual basis at all during his time as president. Trump has promised his policies will lead to 3 percent or higher annual growth, but only time will prove him right or wrong.