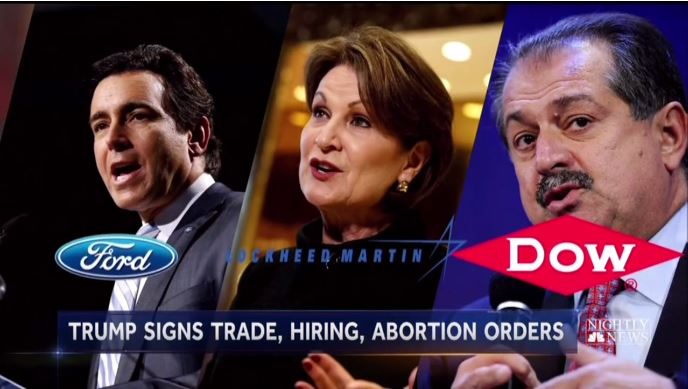 President Donald Trump got elected with promises to rev up the economy and create millions of jobs, so he has made sitting down with CEOs, executives and small business leaders a priority. Only it’s been a media priority to ignore it.

On April 4, Trump was at it again — holding more meetings — this time, a speech to trade leaders and a town hall with 50 CEOs, according to Fox Business. None of the network news programs mentioned it that night. Adding those executives to another 49 separate CEOs he already met with, Trump has sat down with at least 99 business leaders since taking office.

Yet, the liberal news media have not made reporting meetings with CEOs, executives or “business leaders” a priority. Instead, they’ve repeatedly minimized the gatherings and barely quoted the attendees. ABC, CBS and NBC evening news shows mentioned Trump’s meetings in just 10 stories between Jan. 20, 2017 and April 4, 2017.

The president sat down with at least 99 different CEOs and business leaders in six combined meetings during that period, yet the coverage often consisted of throwaway lines from the network shows. Of those leaders who met with Trump, the networks only quoted three or just 3 percent (3 out of 99).

The meetings were with executives of all kinds including technology, auto, pharmaceutical, manufacturing and female, small business leaders (including four Hispanic executives). Some CEOs attended multiple meetings too. Yet, coverage was minimal.

“He met with executives from health insurance companies today,” anchor David Muir of World News Tonight with David Muir said on Feb. 27. That line cropped up in a story about Trump’s health care plan, attempts to “repeal and replace” Obamacare and “backlash” against the GOP.

CBS Evening News inserted a line about Trump’s Feb. 3 meeting with “business leaders” between the jobs report and a story about what changes the president has in store for financial regulations.

Others portrayed the meeting as adversarial, as ABC chief White House correspondent Jonathan Karl suggested on Jan. 23: “And in a meeting with business leaders, Trump warned of a big new tax if any of them move jobs out of the country.”

That day, Trump had a West Wing meeting with the CEOs of 12 major companies, according to Business Insider. Nightly News downplayed it as part of a “flurry of photo ops” and only noted the heads of Dow Chemical, Lockheed Martin and Ford were present. To its credit, Nightly News at least quoted one of those CEOs.

Dow Chemical Company Chairman and CEO Andrew Liveris told NBC, “To say that the president was engaged was an understatement.”

That inclusion of a CEO reaction to the meeting was far more than most of the stories did. Only two other CEOs were quoted in any of the stories.

A March 27, meeting with female business leaders got zero coverage from the networks. Meanwhile Yahoo! Finance and Huffington Post both covered the story.

At that meeting, Air Force veteran and founder and CEO of Trumbull Unmanned Dyan Gibbens sat next to the president. She was one of four Hispanic businesswomen at that meeting.

“It was amazing to sit next to him, a really unexpected pleasure,” Gibbens told Yahoo! Finance. “I feel incredibly honored to have been a part of that conversation. I’m honored to be a part of what I hope will be a continued initiative. He made clear that it’s an absolute priority for the administration, asking for our input on ways we can advance toward these shared goals.”