A federal agency discredited a common argument of climate skeptics in 2015, but now a whistleblower has accused the agency of misleading the public and playing politics. Not that anyone watching the network news would know it.

For several years, climate skeptics argued there had been a “pause” or hiatus in global warming beginning in 1998. Then, in June 2015, a paper from the National Oceanic and Atmospheric Administration erased it. Many news outlets reported that NOAA study and accepted its claims, but on Feb. 5 or 6, the network evening news shows said nothing about the new whistleblower’s evidence against it. 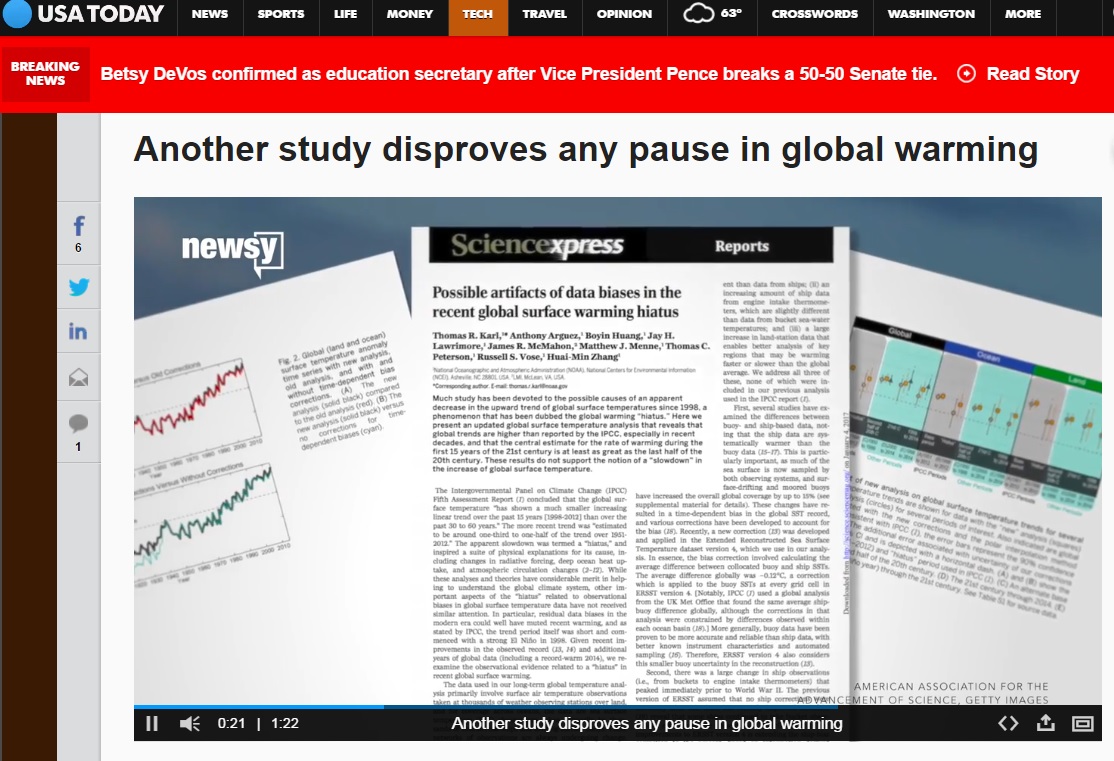 Data scientist Dr. John Bates blew the whistle on NOAA claiming the paper that erased the pause was based on misleading and “unverified” data and never analyzed in accordance with NOAA’s full process, The Daily Mail reported. That prompted many to draw comparisons to the Climategate scandal of 2009.

In June 2015, Science published a study from NOAA’s Thomas R. Karl, which “suggests that the apparent hiatus may have been largely the result of limitations in past datasets, and that the rate of warming over the first 15 years of this century has, in fact, been as fast or faster that than seen over the last half of the 20th century.”

That “pausebuster” paper was embraced by climate activists and the liberal media outlets, especially national newspapers. The Los Angeles Times reported that “A fresh look at the way sea temperatures are measured has led government scientists to make a surprising claim: The puzzling apparent hiatus in global surface warming never really happened.”

The New York Times reported Dec. 5, 2015, “the researchers found, [the pause] did not actually occur.” While The Washington Post harped on it again and again and again, using it to criticize Sen. Ted Cruz as he ran for president and Rep. Lamar Smith who subpoenaed NOAA emails in an attempt to prove the agency altered the data for political reasons.

Dr. John Bates, a data science, climate and satellites consultant for NOAA, told The Daily Mail what the paper called “irrefutable evidence” of problems with Karl’s paper such as “insisting on decisions and scientific choices that maximised warming and minimised documentation.”

Bates also said it was done in order to “discredit the notion of a global warming pause” and “rushed” to influence climate policy decisions — since the U.N. climate change meetings were held in Paris later the same year. He said NOAA superiors ignored his objections in a “blatant attempt to intensify the impact” of that paper.

His objections to Karl’s paper were also outlined in detail on the Climate Etc., blog.

“I was dumbstruck that Tom Karl, the NCEI Director in charge of NOAA’s climate data archive, would not follow the policy of his own Agency nor the guidelines in Science magazine for dataset archival and documentation,” Bates wrote at Climate Etc. The magazine’s policy is that “data should be archived” by NOAA or other public archives.

The Washington Times reported that one day after the whistleblower’s claims went public, NOAA agreed to review the allegations.

“NOAA is charged with providing peer-reviewed data to the American public and stands behind its world-class scientists,” a NOAA spokesman said in an email to The Washington Times. “NOAA takes seriously any allegation that its internal processes have not been followed and will review the matter appropriately.”

Climategate was the name given to discoveries based on hundreds of hacked or leaked emails and files from the Climatic Research Unit (CRU) of the University of East Anglia. CRU admitted it did not keep “the original raw data” for the climate records. Other files talked about the state of the climate data being “SUCH A MESS” and “two different files with exactly the same name” and gaps of time or data stations.

The broadcast networks initially ignored that story, then barely reported it and finally sought to “exonerate” the scientists accused of “manipulating data” by adjusting which weather stations they were using.