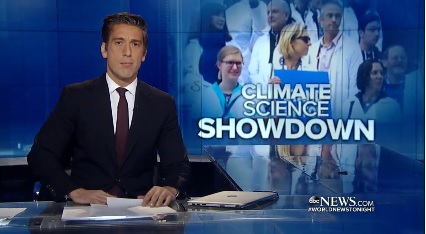 When someone from Donald Trump’s transition team sent a questionnaire with climate questions to the Department of Energy, the liberal media quickly cried foul. But most ignored recent evidence of a politically motivated firing of a DOE employee under Obama.

The climate questions were condemned widely by the press, including by non-American media outlets including The Daily Mail which claimed Trump’s team was composing "hit-list" of Energy Dept workers. Others called it a “witch-hunt” and “intimidation.” In contrast to the minimal coverage primarily in the conservative press and insider DC publications (The Hill, Politico) of Dr. Noelle Metting’s firing.

The broadcast networks held the same double standard as the rest of the media by covering a potential threat to DOE staff, while ignoring actually harm done to one scientist. CBS and ABC morning and evening news programs aired six stories on the possible Trump administration “witch hunt” of scientists and “civil servants” in the past month. The same network did zero stories on the actual dismissal of a DOE scientist under the Obama administration.

On Dec. 20, the Congressional Committee on Science, Space and Technology released a report on Department of Energy “misconduct” related to a radiation research program. Dr. Noelle Metting, the radiation program manager, testified to Congress in October 2014 because of legislation that had been introduced the same year. Her testimony in favor of the low dose radiation research program upset managers and led to her firing, according to the committee’s investigation.

Why? Not because she was dishonest or critical of the agency, but because continued funding for that research would not further Obama’s climate priorities. Frustrated managers, in an email exchange, indicated that the low-dose nuclear radiation program Metting worked on was not “directly related to administration priorities of climate or clean energy.”

The Science, Space and Technology Committee concluded in its report that DOE managers were trying to “terminate research programs that could divert funds from the President’s Climate Action plan.”

The report was released the same month as the liberal media were bashing the Trump transition team over the questionnaire. On Dec. 14, the Trump team said it “was not authorized or part of our standard protocol.”

Three of the six network reports about the “concerning” questionnaire aired after Trump disavowed it. But only one of them, an ABC World News story, admitted it. A CBS This Morning report and CBS Evening News segment on Dec. 17, and Dec. 22, complained about the questions without telling viewers what the Trump team had said.

CBS often brings on Time Editor-at-Large Jeffrey Kluger to promote climate alarmism, so it was only natural This Morning turned to him for its Dec. 17, report about Trump’s environment and energy cabinet picks and the questionnaire.

Kluger said scientists were rightly “concerned,” declared that “global warming is an established fact” — and “immutable” and “non-negotiable” one — and touted the power of “slowdown” federal employees could use to thwart the new president.

Methodology: MRC Business searched Nexis from Dec. 4 through Jan. 3, for ABC, CBS and NBC news stories mentioning climate change or global warming, the Department of Energy, questionnaire or Noelle Metting to see how much coverage there was of the questions sent to the DOE compared to the firing of Dr. Metting.