CNN Chief Business Correspondent Christine Romans had a hissy fit on Thursday's CNN This Morning over House Republicans voting to gut the $80 billion IRS funding following their pledge to nix plans to hire 87,000 new employees over the next ten years. 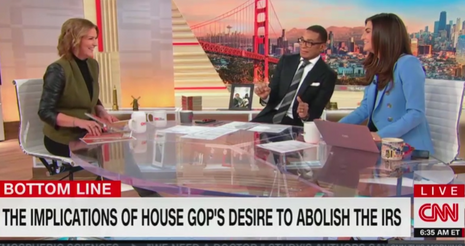 Romans flailed at House GOP “pass[ing] a bill based on a demonstrable falsehood. There is no army of 87,000 IRS agents coming after American families and small businesses.” Of course, Romans said nothing about how 57.3% of the estimated “86,852 new IRS” hires, “(49,754 in total) would be assigned to enforcement,” according to The Heritage Foundation.

Romans instead chose to gaslight: “That’s not what this is. It’s crucial new funding to get the IRS up to speed. There are 1.4 million backlog, right now, of last year’s tax returns that still need to be done.”

This is misleading. As The Heritage Foundation noted in another analysis, “[t]he lion’s share of the new funding, $45.6 billion, will go to enforcement activities like new audits, litigation, asset monitoring, and collections.”

But Romans proceeded to screech at “House Republicans saying, ‘There’s this army going to come after small business.’ No, it’s about being able to audit the super rich and just get the job done!” But a 2022 Government Accountability Office report noted that “[f]rom fiscal years 2010 to 2021, the majority of the additional taxes IRS recommended from audits came from taxpayers with incomes below $200,000.”

Why would the IRS all of a sudden break that pattern after 11 years to just target the so-called “super rich” now?

Romans also spun that the 87,000 would help replace an estimated 50,000 IRS employees supposedly set to retire over the next 5 years. A swing and a miss.

The IRS laid out in its 2021 report on the $80 billion funding that “[b]ecause the expansion in the IRS’s budget is phased in over a 10-year horizon, each year the IRS’s workforce should grow by no more than a manageable 15%.”

This would mean a 252% increase in the IRS’s current workforce —which Romans mourned was “dramatically” in decline — that would translate to about “206,000 more IRS employees today,” according to The Heritage Foundation’s calculation, more than double the current size (78,661 as of fiscal year 2021.)

The Heritage Foundation noted that only a paltry “$3.2 billion would go to taxpayer services, despite the IRS answering only 18% of the phone calls it received in 2022. That’s a mere 9% increase for funding in things like account services, taxpayer education, and filing assistance.”

But Romans feigned frustration: “If you tried to call the IRS last tax season, you couldn’t get through.” If Romans did journalism, she would ask why such a small fraction of the $80 billion in IRS funding was allocated to taxpayer services in the first place.

The network also played a clip of CNN anchor Jake Tapper scolding Rep. Mike Johnson (R-LA) over the 87,000 potential IRS hires being called “agents” in an attempt to mock Republicans. “Not agents. Employees,” smirked Tapper. This is just a dumb splitting of hairs.

Here’s how The New York Times described the new hires Aug. 9, 2022: “Over a decade, the bill would add 87,000 new I.R.S. agents dedicated to audits, customer service and upgrading the agency’s technology.” But for Romans — who giggled after the clip — nuance be damned!  [Emphasis added.]

Conservatives are under attack. Contact CNN at 404-827-1500 and demand it stop shilling for Big Brother.