It looks like not even The Associated Press is buying President Joe Biden’s seemingly never-ending list of excuses on the inflation-plagued economy. 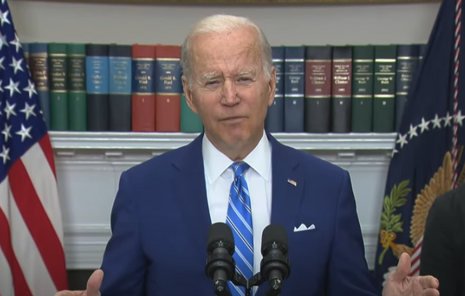 AP ripped Biden’s unfounded economic optimism as risking “contribut[ing] to a dissonance between Washington and people across the country who are confronting genuine and growing economic pain.” In addition, Biden’s predictions of a “rosy political future for the Democratic Party” seem at “odds with a country that he acknowledged this week was ‘really, really down,’ burdened by a pandemic, surging gas prices and spiking inflation,” AP critiqued.

But AP couldn’t let it’s reality-check on Biden go without a propaganda-laced prescription for how Biden and company could rebrand their message:

But where White House officials last year harbored hopes that voters could be convinced of Biden’s accomplishments and reverse their dismal outlook on the national direction, aides now acknowledge that such an uphill battle is no longer worth fighting. Instead, they have pushed the president to be more open about his own frustrations — particularly on inflation — to show voters that he shares their concerns and to cast Republicans and their policies as obstacles to addressing these issues [emphasis added.].

But the rebranding may not be enough. AP noted that “Biden’s overall approval rating hit a new low of 39% last month. Even among his own party, just 33% of respondents said the country is headed in the right direction, down from 49% in April.”

The publication's red-pill moment on Biden’s excuses for inflation came after it lobbed a softball interview to the president a few days ago. AP White House, politics and economics writer Josh Boak’s June 16 interview with Biden was the epitome of puffy journalism.

On the economy, Boak fawned that Biden “made the choice to prioritize job growth” upon taking office even though “Republicans right now are saying to voters that inflation started with your COVID relief package.” In short, Boak framed the issue of skyrocketing inflation with a typical “Republicans Pounce” angle. The headline for the interview needs no explanation: “AP Interview: Biden says a recession is ‘not inevitable.’”

Conservatives are under attack. Contact the Associated Press at 212-621-1500 and demand it tell the truth about Biden’s responsibility for America’s inflation crisis.