With little in terms of public condemnations from the liberal media, President Biden went over a year in office without having sat for a major print interview with a reporter (not a columnist) before it came to an end Thursday with the Associated Press’s Josh Boak.

Boak’s questions were the epitome of softballs, inviting him to explain his thinking during “a really unique time in American history,” share what it’s like to face such united Republican opposition, and state whether Americans appropriately understand “the stakes” with regard to foreign policy. 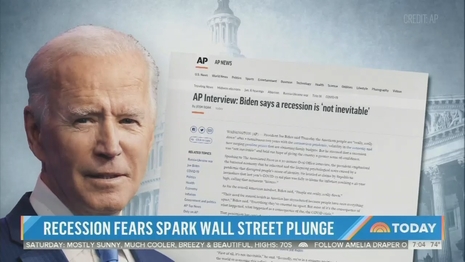 One of Boak’s softest questions was his first one: “I’m really interested in how you’re thinking and how you’re making choices during what seems like a really unique time in American history.”

Biden complimented Boak, calling it “an interesting question” before saying he’s “making choices” while also ensuring he “give[s] ordinary working-class and middle-class folks a shot” and that he was frustrated how Donald Trump “arranged” the economy to benefit the rich.

Boak’s second question wasn’t any better, which was prefaced by the reality of “voters” feeling “very pessimistic”: “[H]ow do you as a president provide a sense of stability and strength[?]”

Why is that? Because it seems like you knew the risks on Ukraine with regard to higher gasoline prices that carried political risks for you at home so when, when your aides said, “Look at the situation,” how did you make that choice? What would you tell someone in Latrobe, Pennsylvania?

Once Biden went on about how the war in Ukraine could cause ripple effects, Boak wondered if Americans understand things as they should: “Do you think Americans have that sense of the stakes on a daily basis?”

Moments later, Boak pivoted to the economy and that Biden “made the choice to prioritize job growth” upon taking office even though “Republicans right now are saying to voters that inflation started with your COVID relief package.”

A miffed Biden said there’s “zero evidence of that” because “we’ve reduced the deficit by $350 billion last year” and ensured there’s “hundreds of thousands of job openings” to go with “another 8.6 million jobs” gained.

Questioned whether he agreed with Treasury Secretary Yellen that the American Rescue Plan could have contributed to inflation, Biden became testy: “Now you just said two different things. You said Republicans said I caused inflation. She said it may have a marginal impact on it.”

Let me ask, stepping back, after yesterday’s Fed meeting. I know that you’ve said: “Look, our economy is strong. We have these jobs. It’s the best look we’ve had in decades.” But then you’ve got serious economists who warn of a recession next year. What should Americans believe?

I believe that was a Fed survey. You see this interesting shift, though, in the Census pulse surveys, which show people are clearly employed in a way they haven’t been. They are less dependent on unemployment benefits and the government for aid, and yet more of them say they’re having trouble with meeting their weekly expenses. What’s that paradox?

Following a sidebar where Biden asked Boak about his kids, the President blamed anxiety about the economy on the growing mental health crisis in the country.

Boak reacted to this excuse by lobbing another softball: “So you’re talking about a country that has undergone profound psychological trauma. What can you as a president do to address that psychology to make people feel more optimistic. Be confident?”

Biden changed subjects to climate change, so Boak followed with weak queries on climate change and not having “the votes” for an agenda “helping the middle class” In response to the latter topic, Biden told Boak how he was “impressed by your objectivity” and “how you write” (click “expand”):

BOAK: And yet you face a possible tradeoff in that climate change has this big impact. And yet Americans are unhappy about the cost of gasoline and fossil fuels. And I’m curious, like, what does that mean for you if you have to say, we need to increase production in the short term and companies say, but we don’t have the long-term incentives?

BIDEN: Well, I say in the short term, do the right thing. Instead of, you know, they’ve made 315 or 16 billion, 35 billion dollars, these major oil companies in the first quarter. So I think it’s three, twelve, five ... I don’t know how many times (inaudible). Don’t buy back your own stock. Don’t, don’t just reward yourselves. I mean, look, here’s what. A lot happened. One of the things I ran on when I was running is that I, I come from the corporate capital of the world, Delaware. More corporations incorporated in my state than all the rest of the United States combined. Not a joke. Literally. And, you know, they try to make me, my fr—, the MAGA party, tries to make me out to be this socialist. I got elected seven times, not just six, seven times, in that state. But one of the things that’s changed is the notion of what constitutes corporate responsibility. The fact that you’re in a situation where you have a Fortune 500 company, you got 55 paid zero taxes, made 40 billion dollars. Those surveys also show nobody, including Republicans in suburbia, think the tax system is fair. Billionaires paying 8%. All these things that are occurring that have to be shifted. It used to be, for example, I’ll give you one example. It used to, am I holding up?

BOAK: Do you have the votes as of today, because …

BIDEN: Yes. I think it’s changing. Well, first of all, I had the votes. If I had told you (garble) ... You’re not doing (inaudible). I’m impressed by your objectivity, how you write. I’m not being, I shouldn’t say that on the record because then you’ll get in trouble.

BIDEN: But all kidding aside. Usually (inaudible) the question I get asked in the beginning with the Recovery Act: Can you get this passed? How can you possibly do that? I got 1.9 trillion dollars. Saved the economy.

With a White House aide telling them their time was up, Boak gushed to Biden that “people really want to know” if his agenda can succeed since he “did something revolutionary on child poverty...with the child tax credit, an idea that came in part from Newt Gingrich back in the day...and a lot of families had hope[.]”

The AP thumbed its nose at the audience by having transcript show the sit-down ended with an “[o]ff-the-record discussion,” but not before Boak’s final four questions massaged Biden’s ego in lamenting the level of GOP opposition (click “expand”):

BOAK: Were you surprised because you referenced the reason why you ran was Charlottesville. And I’m curious, have you been surprised when you say Republicans weren’t going to work with you at all on some of these issues? Did that surprise you, given what you knew that compelled you to run? And how do you deal with that environment? And how does that compare to your predecessors who are on the wall?

BIDEN: Well, my predecessor on the wall didn’t pass the (inaudible) his first year, number one. Number two, the reason ... you know why that predecessor is on the wall. You never saw his picture in this office before. I asked my brother to put together the office for me — decide what desk I’d have. I didn’t realize the outgoing president had to be out 10 o’clock, the incoming president by 2 o’clock. And you pick what you want and you got to get it all in by then. So I (inaudible) Jon Meacham come in and he set my office up for me, and so the desk they picked, and you know everything, everything except the wallpaper. And I used to, I came in here for eight years in a row as the vice president. George Washington’s photograph is over there. And I looked and I said, “Why Franklin Roosevelt?” Not that I don’t like Franklin Roosevelt, but why put that big portrait of Franklin Roosevelt? And Jon Meacham said, “Because no one ever inherited that kind of big circumstances and dire, more dire straits than he did that last time.” I said, “Oh, that’s encouraging.” And I said, “Why Abraham Lincoln?” And he said, “The country’s never been as divided since the Civil War.” I knew those two things coming in. But what I also believed was I could get some of it done. There was a, I just was reading an article (inaudible) that article by the, uh, the guy talking about Biden and how he brought the country, brought Republicans together, Republicans and Democrats. Anyway, I’ll, I’ll get it to you. I’ll find it. Oh, here you go. New York Times Magazine. That’s factually correct. Now, there’s a lot I couldn’t get done.

BOAK: Because you’re about to get the Ocean Safety Bill, which passed the House with bipartisan support.

BIDEN: Well, yeah. By the way, And when you remember, I called for that, everybody said, “Oh, no, no no.” But guess what? It’s gonna pass. But my generic point is that, you know, we’re going to get gun safety. We’re not going to get what I wanted. We’re gonna get a part where everybody, we’re gonna get the, uh, the uh, uh, the, the Innovation Competition Act, a hundred million bucks is going to be invested outside of Cleveland by Intel. We’re going to have another 57 mil ... . You know, there’s forced arbitration I got rid of in sexual orientation, sexual harassment cases. Juneteenth I got passed, no one said it could be done. I’m not saying, “Look at all I’ve done.” But I knew that were probably, probably 15 sort of traditional, mainstream, conservative Republicans left. And I include in that — and I’m going to get myself in trouble, and I’ll get him in trouble, probably — but the minority leader from Kentucky. He’s a solid, mainstream guy. But you have the, ah, the folks from Texas. You have a lot of folks who are very, very MAGA. For example, Johnson, you know, and Scott, they’re. Every five years, Social Security, Medicare, Medicaid go out of existence. You’ve got to build them back. They, these guys mean it. I mean, why in the hell did you ever think that would happen in your lifetime, and you’re a young man?

BOAK: I feel like I’m getting more gray hair every day, sir. (Laughter.)

BIDEN: Well, I tell you what, well at least you’re keeping it. I’d settle for orange if I had more hair. But all kidding aside, I think this is a process and I think what you’re going to see this election is people voting their overall concerns as well. Even people who are not pro-choice are going to find it really, really off the wall when a woman goes across a state line and she gets arrested (garble) where she’s doing. Even people who are, you know, I mean, there’s so many things these guys are doing that are out of the mainstream of where the public is. And I think — but it is, I knew I was stepping into a difficult moment[.]

To see the full AP transcript (with some stylistic tweaks), click here.