The Washington Post continued its idiotic comparison of Rep. Elise Stefanik (R-NY) to the self-proclaimed white supremacist Buffalo, New York, mass shooter in an attempt to publicly shame her donors. 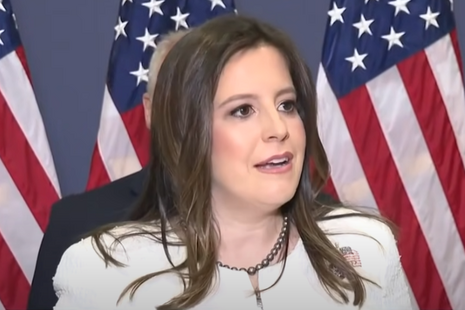 The authors wailed that the companies “made vocal pledges to use their resources to combat racism while at the same time bankrolling a politician with a message widely seen as racist.”

In a rank display of bias, the newspaper has been pounding fallacious tabloid nonsense against Stefanik for over a week.

Frankel and Freedman propagandized that Stefanik’s 2021 campaign ads condemning illegal immigration “are under renewed scrutiny after a deadly mass shooting in Buffalo, where an 18-year-old shooting suspect was allegedly inspired by the baseless theory — about people of color replacing White people — to kill 10 people at a supermarket in a predominantly Black neighborhood.”

The authors correctly noted that Stefanik characterized her campaign ads as pertaining to illegal immigration, “not white supremacy.”

But the authors tried to cleverly skew her ad saying Democrats wanted a “PERMANENT ELECTION INSURRECTION” via illegal immigration as a generic statement against immigration writ-large. “[O]nline ads from Stefanik from last September accused Democrats of wanting a ‘PERMANENT ELECTION INSURRECTION’ and an immigration amnesty plan that ‘will overthrow our current electorate and create a permanent liberal majority in Washington,’” Frankel and Freedman spun.

Both authors conveniently omitted the reported statement in the same ad that made it clear Stefanik was talking specifically about illegal immigration. “‘Their plan to grant amnesty to 11 MILLION illegal immigrants will overthrow our current electorate and create a permanent liberal majority in Washington.’”

But context didn’t matter. Both Frankel and Freedman used their phony logic to harass the 22 corporate donors listed in their piece: “None of the nearly two dozen companies contacted by The Post addressed questions about whether they saw a contradiction between their past statements and their political donations to Stefanik.”

The authors proceeded to cough up blatant falsehoods in an attempt to smear Stefanik:

The idea that there is a concentrated effort to use non-White immigrants and others to intentionally outnumber whites in America has gained traction in conservative politics. The ‘great replacement theory’ baselessly argues that a shadowy group of leaders is working to displace White Americans.

Newsflash: Being against illegal immigration because it’s illegal has nothing to do with the “great replacement theory” or the reported white supremacist views of an alleged mass murderer.

Conservatives are under attack. Contact The Washington Post at (202) 334-6000 and demand it stop attempting to make a false connection between Rep. Stefanik and an alleged mass murderer.