WashPost’s Bump Makes Wild Push for COVID Stimulus; His Own Paper Undercuts Him

Washington Post national correspondent Philip Bump made a wild argument to try to pressure Congress to pass a massive $1.9 trillion stimulus bill that his own newspaper said may be “mismatched.” 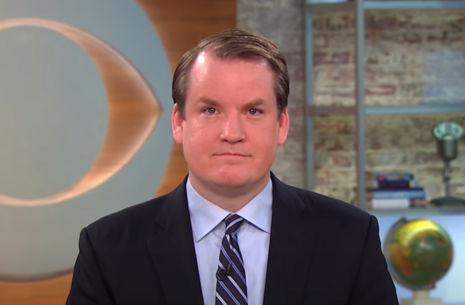 Bump’s March 4 story, updated March 5, kicked off with a gross headline: “While the Senate read the coronavirus relief bill, nearly 900 Americans may have died from the virus.” Bump decried how the Senate vote on the bill was delayed  because “Sen. Ron Johnson (R-Wis.) decided to force the chamber to read the 628-page bill in its entirety.” Bump praised how the bill included “financial support for millions of Americans, as well as billions of dollars meant to bolster vaccine distribution and testing — tools which could bring the pandemic to an end more quickly.”

Bump must have missed that The Post published a story that undercuts his entire argument: “As Senate rushes $1.9 trillion bill through Congress, Biden faces doubts over whether it’s still the right package.” The 10:36 a.m., March 4 Post story said the following:

The economy is doing better, coronavirus cases have plateaued at a high but much-reduced level, and Biden has said there would be vaccines for every American adult by the end of May. For policy experts and even members of Biden’s own party, the improving picture is raising questions about whether the stimulus bill is mismatched to the needs of the current moment, [emphasis added].

Bump should read his own newspaper before publishing propagandized stories.

Bump also made an emotionalized appeal: “At this moment, on this issue [the $1.9 trillion stimulus], time can be measured in human lives.” In his estimation, Bump said, “[t]he reading of the bill completed after 10 hours, 44 minutes. Given the current rate at which people are dying of covid-19, that means that about 880 Americans likely succumbed to the disease during that period.” It appears Bump has resorted to exploiting people dying from COVID-19 to make his case for ramming through an irresponsible spending bill. [Emphasis added.]

Perhaps Bump would prefer Johnson adopt House Speaker Nancy Pelosi’s (D-CA) infamous mantra: “[W]e have to pass the bill so that you can find out what is in it, away from the fog of controversy.” 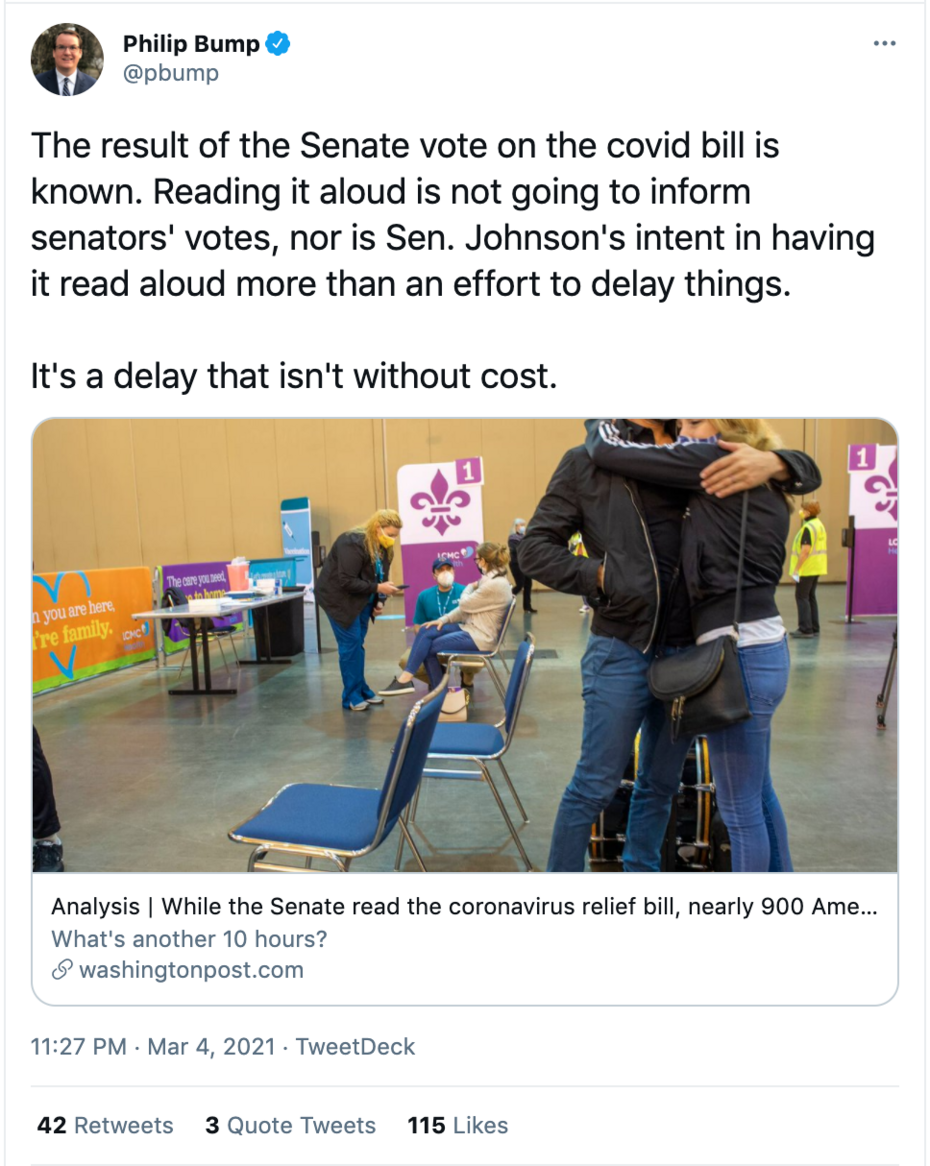 Johnson could have ended the reading whenever he wishes, though he’s also indicated that he plans to introduce numerous amendments in an effort to obstruct its passage. His opposition derives from the amount of money involved, a point he reinforced during a speech on Wednesday evening by noting that a stack of 1.9 trillion one-dollar bills would reach well into space. Those 880 dead bodies also occupy a lot of space.

Did Bump miss the recent Congressional Budget Office (CBO) estimate? The CBO said that the economy would quickly recover if “current laws governing federal taxes and spending (as of January 12) generally remain in place and that no significant additional emergency funding or aid is provided.”

In addition, advisers to former President Barack Obama, former Director of the National Economic Council Larry Summers and Counselor to the Secretary of the Treasury Steve Rattner, came out against the spending package. Summers said the “'$1.9tn programme on top of the $900bn programme passed in December raises concerns about inflationary pressures.'” Also raising concerns about inflation, Rattner said on MSNBC that the gargantuan bill could “certainly be money that’s not well spent.”

Conservatives are under attack. Contact The Washington Post at 202-334-6000 and demand it distance itself from Bump’s propagandized push for an irresponsible spending bill.