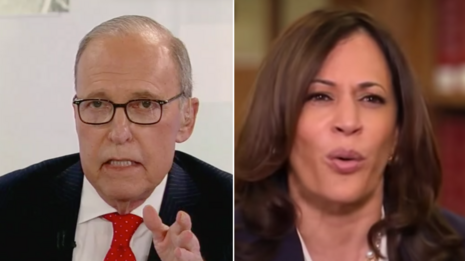 Kudlow went right for the jugular on his debut show Kudlow by accusing President Joe Biden’s administration of peddling “falsehoods” about his predecessor and being “protected by the media” in the process. Harris had falsely claimed to Axios on video that the Trump administration had “no national strategy or plan for vaccinations.” She continued: “[I]n many ways, we are starting from scratch on something that's been raging for almost an entire year.” Her claim that the Biden administration was “starting from scratch” has been debunked, including by National Institute of Allergy and Infectious Diseases Director Anthony Fauci last month. Fauci contradicted his earlier statements yesterday by reinterpreting the Harris claim on CNN in an apparent effort to defend her.

Kudlow was following up on fiery hot mic remarks he had made concerning the Harris video on another Fox News show. When the Feb. 16 edition of America Reports had played the clip of the comments made by Harris, Kudlow shot back over a hot mic: “Bullshit! Bullshit! Bullshit!”

Kudlow later retorted on his show that “what the vice president said just burned me up and is simply not true. OK? It is somewhere between cognitive dissonance and an outright falsehood lie.” After admitting that “not everything went perfectly,” Kudlow said the Trump administration’s “Operation Warpspeed was one of our greatest triumphs. And by the time of the inauguration, Jan. 20, the Trump efforts were generating 1.3 million vaccines per day.” Kudlow assessed that “right now, the total volume of vaccines exceeds the total volume of cases.” He concluded: “[D]on’t tell me that they started from scratch. That is simply wrong.”

During a later segment with fellow Fox Business host Stuart Varney, Kudlow reiterated his disdain for the false Harris smear of the Trump administration’s vaccine rollout plan: “I’m colorfully on record what I think about what Vice President Harris said.”

After he restated his concession that the “Trump approach was not error free,” Kudlow highlighted the successes of Operation Warp Speed by pointing to a Wall Street Journal op-ed by Harvard University Professor of Government Graham Allison. An op-ed by Allison, headlined “Who Made the Vaccine Possible? Not WHO,” made a stark confession: “Pharmaceutical companies and Trump’s Operation Warp Speed deserve the vast bulk of the credit.”

Varney didn’t refrain from expressing his enthusiastic agreement with Kudlow: “President Trump did a lot of things right. Warp Speed was just one of them.” Varrney noted how Trump “gave control to the states fairly early on in the pandemic. And that was a good idea, because the states have a better idea of what’s going on in their localities.”