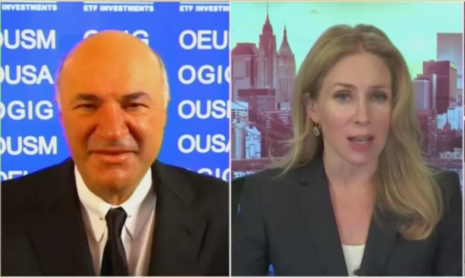 During the Election Day edition of CNBC’s Squawk Box, co-anchor Rebecca Quick highlighted a recent CNBC/Change Research survey that found more likely voters in swing states (48 percent) chose the economy as the most important issue facing the country going into the election. She then turned to her guests O’Leary and Operation HOPE Inc. CEO John Hope Bryant for comments on what they’re seeing happen in the business community. O'Leary stated that 80 percent of his companies “are really, really thriving” after months of the pandemic. O’Leary later pivoted towards the election and hammered Biden for anti-fracking/anti-oil comments he made during the last presidential debate, and stated that it could cost him the election.

O’Leary stated: “I will say one thing regarding the [election] outcome. I got no policy from the debates, except for that moment in the second debate when it became clear — and I’m just speaking now from what — I’m going to make a prediction about the outcome tonight.” 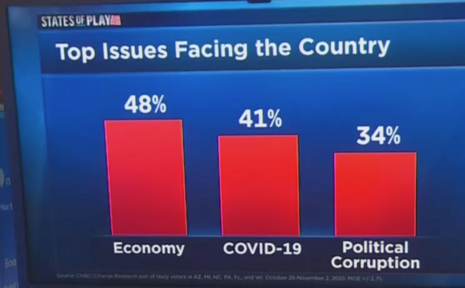 His prediction: “[I]f Biden, in fact, loses, it’ll be because of a 40-second dialogue regarding shutting down the hydrocarbon infrastructure.” Leary said that “[I]n my investing world, we think about 8 million jobs exist in the steel industry and the fracking industry. Many people don’t realize 41 percent of fracking is done on federal land.”

According to O’Leary, “[I]f you’re a family in Pennsylvania, in Texas, in Ohio, it affects your entire livelihood. And that was not lost in that debate. I think if Biden loses, we will go back and see that as the pivotal point where he lost major swing states. He should have never talked about shutting down hydrocarbons. A big fail on that one.”

During the October 22 post-debate analysis on CNN, Dale showed a 2019 clip of Biden saying about fracking that his administration would “make sure it’s eliminated.” Though Dale tried to throw Biden a bit of undeserved slack, he did at least admit Biden’s previous statements do underscore an anti-fracking bent. Dale said: “Biden did not say the words, ‘I oppose fracking’ there, but he clearly was at least very strongly suggesting that he was an opponent.”

Biden had made a jaw-dropping statement during the debate that he would “transition from the oil industry.” CNN tried to avoid that potentially politically lethal statement in its debate analysis.