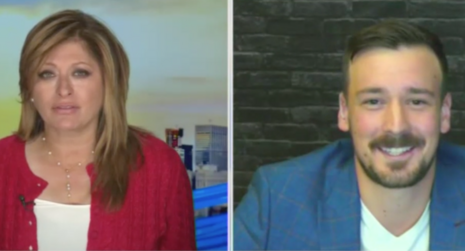 In an interview with Fox Business host Maria Bartiromo, Matze gave his perspective on the antitrust hearing, and ripped Big Tech’s incessant habit of curating content. Matze said on Friday's edition of Mornings with Maria: “Overall, I think it really shows that this content moderation method that these Big Tech companies are using — specifically Facebook and Google — this content curation method is not popular with anybody.”

Bartiromo referenced Rep. Devin Nunes (R-CA), who reportedly referred to Twitter as “content creators” and “not the bulletin board that they proclaim to be.” She asked Matze if he thought these social media companies are “content creators.”

Matze answered that “a lot of them are.”

Watch the entire interview below:

He proceeded to note that these social media companies “have a liability protection, which is supposed to be granted to companies which are essentially neutral and town squares.” Matze then promoted his platform as a haven for freedom of speech: “Essentially, what Parler is, is a town square. And what we’ve created is the idea that there is no content bias.”

He continued: “On the other hand, these companies have kind of abused that concept, and said: Well, yeah, they’re technically Section 230-exempt. But at the same time, they’re curating content and saying: ‘This is now going to trend. This won’t. This wouldn’t be good for our brand. This news article would be.’” Matze claimed that “it is kind of in a grey area, where they’re trying to behave one way but also reap the exemptions of behaving a different way.”

Bartiromo pressed the CEO to address how censorship will not occur on his platform, and Matze responded:

There is no censorship of any kind. We do have clear rules about violence, any illegal activity — anything that you couldn’t do in public, you couldn’t do on Parler — but there is no ideological censorship or ideological bias of any kind. People on the left, people on the right — everybody [is] welcome to the site. And I think that’s what makes it such a great community. People understand that this is a place where everybody can have a discussion.

Matze continued: “We don’t have fact-checking experts that decide what people think. People can talk about it on their own and come to a conclusion on their own, which I think is amazing.”