White House Director of the National Economic Council Larry Kudlow called himself a “happy camper” about the state of the U.S. economy and criticized those making it sound like the country is in recession.

“I do want to say and repeat that the U.S. economy is very strong and that’s what the jobs report [shows], and wages are rising,” he told anchor Stuart Varney on Fox Business’ Varney & Company July 15. 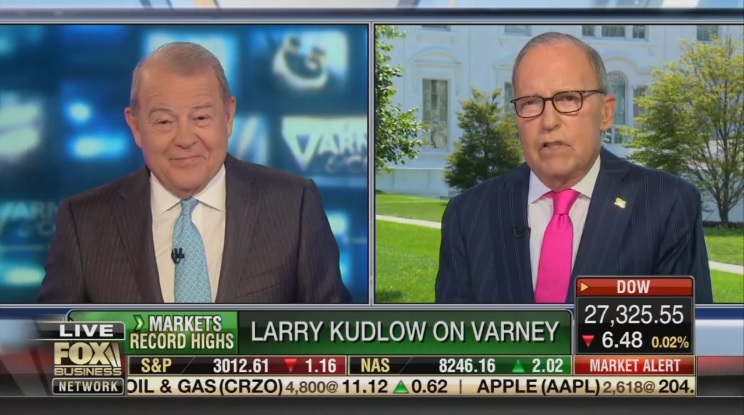 Kudlow criticized those trying to gloss over the good economic news.

“I grow weary as I read these articles and some of our critics, some of whom, you know I’m not political so I can’t go down that road, but some of whom appear to be running for higher office and they are painting a picture of an economy deep into recession. We are in a strong prosperity boom and every data point shows that,” he said.

Kudlow noted that people at lower income levels have benefitted — a point The Wall Street Journal has also made. It reported that people with less education and fewer job skills were “winners” in the current economy, thanks to such low unemployment.

“When we go into the distribution of these economic benefits it is precisely the bottom half, in some cases the lowest 10 percent, that have actually done the very best in this economy,” Kudlow added.

Varney also asked Kudlow for a prediction of second quarter economic growth. Kudlow said the country is on a “3 percent growth path,” but didn’t provide a second quarter figure. He described the economy’s trends as “very good” and took another dig at doomsayers.

“I guess in the back doorway, the economy, consumers, we are seeing a pickup of business. Profits are going to outperform the usual doom and gloom. So I’m kind of a happy camper today,” he said.