It is becoming likely that a controversial star-spangled banner in North Carolina will continue to wave over Gander RV in Statesville.

The city said that its leaders will consider amending an ordinance regulating the size of flags flying in a highway business zone, according to WSOC TV. Gander RV and Camping World CEO Marcus Lemonis steadfastly refused to comply with city orders to take the flag down and was even willing to go to jail. Lemonis is also the star of CNBC’s The Profit. 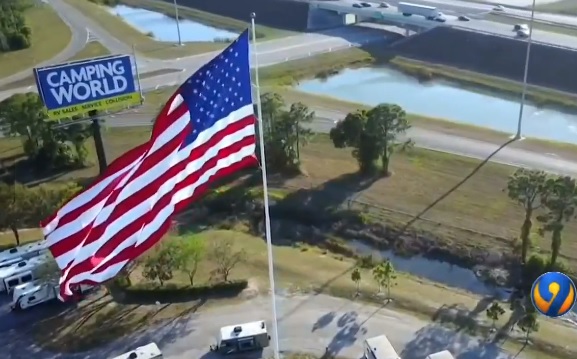 According to a May 29 press release, Statesville Mayor Costi Kutteh asked the city planning department to prepare an amendment to the ordinance that, if passed, will allow the flag at Gander RV on Interstate 77 to continue flying. WSOC reported that it is expected to pass July 15.

Kutteh said there had been a backlash against Statesville’s action, “People from all over the country have jumped on this issue and called us names I can’t repeat. When our community’s efforts to conduct business in an orderly, lawful manner begins to hurt our businesses, then it’s time to put a stop to it.”

WSOC reported that Lemonis thought the city was “missing the point.” He tweeted that the state code did not impose any regulations on flag size “unless it impairs the health, safety or wellness of the people.”

“This isn’t about (Camping World) or (Gander RV). Amend the code to remove the size restrictions for all businesses, not just mine,” he added.

Lemonis flies large American flags over each of his stores. But the city of Statesville, North Carolina claimed it was too large and in violation of city ordinances. After months of $50 per day fines, it sued him on May 7.

He stood up to the city and refused to take down his local store’s American flag, telling the Fox Business Network on May 23 flying the flag was part of his “DNA” and that “it’s not coming down under any circumstance.”

“I understand that if I don’t comply with that order that I could and would be arrested and out in jail until the flag came down,” Lemonis said. He also disputed the city’s charge that he was “messing with the FAA in terms of air traffic rules,” and added that his company flies “this size pole and this size flag in over 180 cities across the country.”