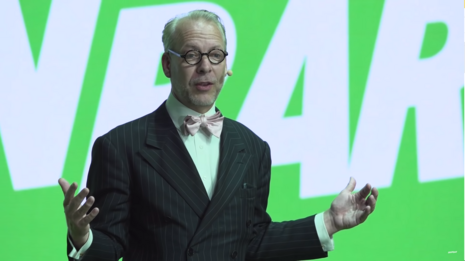 While reporter after reporter praised President Joe Biden for the July jobs report showing a 528,000 increase in nonfarm payrolls, Tucker exposed the government’s numbers as a farce in an Aug. 8 column in The Epoch Times headlined “The Jobs Hoax.” The “hoax” was that the apparent increase in the employment numbers was not a sign that Biden started a “job-creation-machine,” but actually that the economy is forcing people to pick up “second and third jobs,” Tucker wrote in his column.

In an exclusive interview with MRC Business, Tucker warned against trusting media spin on the economy “so we don’t find ourselves living in an Orwellian world, in which the government is forever broadcasting great news about the great glories of life while people are at home suffering and dying and wondering why their electricity bill is three times what it was six months ago.”

That’s not what the media might have you believe, however. “The implication is that the Biden administration has somehow restored America as a beautiful working enterprise,” Tucker said.

But that is simply not the case and the data proves it.

The problem is that there are “presumably more jobs, but fewer people doing them,” Tucker said. And by any account, that’s not good news for the economy.

But instead of reporting the facts, the government, the media and economists are telling their own stories on the economy, according to Tucker.

It also doesn’t help that many of today’s economics reporters don’t have proper training, akin to the scads of reporters who reported on COVID-19 who didn’t have medical training, he added.

What did Tucker’s analysis of the jobs numbers actually reveal?  “A declining worker-to-population ratio and labor participation,” he said, “in a period in which we haven’t even recovered from the devastation of lockdowns.”

But the government hasn’t acknowledged Americans who are struggling, Tucker said. In fact, it does the exact opposite: “There’s so many stories of suffering, of widespread suffering, and then you hear the Biden administration just tell you, ‘Ah, we’ve got a jobs machine, the greatest economy we’ve ever had,’ and it’s just getting creepy. It’s just feeling like 1984.”

But Tucker made clear that the economic situation was not completely hopeless, noting the path out of recession lies through better understanding the value of free enterprise: “We, as a country, need somehow to revisit some basics, like the merit of free enterprise and creativity and an economy that’s not centrally planned and controlled by bureaucracies.”

“There’s nothing government can do to bring you prosperity and happiness, I’m sorry to report.”

Tucker has been an outspoken advocate for personal liberty and for resisting government-imposed COVID lockdowns. Prominent scientists within his Brownstone Institute were key in developing the Great Barrington Declaration, a landmark statement signed by 15,907 medical and public health scientists and 47,104 medical practitioners that opposed COVID-19 lockdown policies and argued that “keeping students out of school is a grave injustice.”