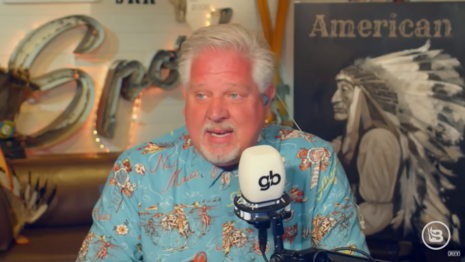 “Inflation is surging,” Beck said on the Aug. 2 edition of his radio show, “The Glenn Beck Program.” “More and more Americans are living paycheck to paycheck.”

The reason for that? None other than Biden’s policies, which have made life more expensive across the board, Beck explained.

One significant benchmark of economic health is the number of Americans who are living paycheck to paycheck. Beck said that a whopping 157 million adults, or 61 percent of Americans as of June, are only one missed paycheck away from financial ruin. And it’s Biden who’s responsible for that, Beck said.

The percentage of adults living paycheck to paycheck was 55 percent one year ago, according to CNBC.

“This is a real problem,” Beck continued. “We’re going in the wrong direction.”

These numbers, which Americans know painfully well from their everyday lives, are tanking Biden’s support levels across the country, Beck added.

“[Biden’s] approval rating is so low, not just because everything he’s doing is leading to more misery,” Beck said. “His approval rating is so low because he refuses to recognize the truth. Everytime he says, ‘We’re not in a recession,’ or ‘Inflation is just transitory,’ people stop listening to everything else he says, because their experience, their day-to-day experience is telling them differently.”
Conservatives are under attack. Contact ABC News at 818-460-7477, CBS News at 212-975-3247 and NBC News at 212-664-6192 and demand they hold Biden to account for the recession and inflation crisis.