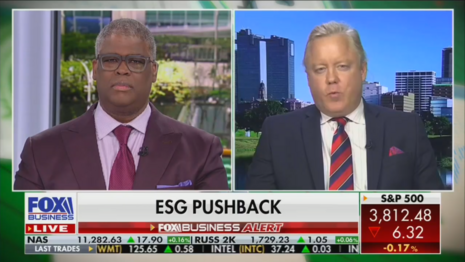 An investor known for starting a “MAGA” investment group denounced environmental, social and governance standards as toxic in an interview with Fox Business host Charles Payne.

“This ESG movement is really destructive,” Point Bridge Capital CEO Hal Lambert said during the July 13 edition of Fox Business’s Making Money with Charles Payne. Lambert continued to lambast the ESG movement, saying it was “not good for poor countries” and “not good for capital free market society. It is a Marxist movement underneath it all. Wall Street has jumped on board because they can charge higher fees to do these ESG screenings, but it’s really destructive to companies.”

Administered by a handful of ratings agencies, including Dow Jones and S&P Global, environmental, social and governance standards — also known as ESG — are rules that drive companies to pursue woke policies. Companies that don’t pursue woke policies are given a lower score, which harms their reputation.

Lambert blamed the recent food crisis that led to violent protests in Sri Lanka on the ESG movement:

“If you look at what’s happening in Sri Lanka right now, where they have run out of food, it is because of the ESG movement, where they didn’t want them to use fertilizer because it was not good for the green initiative. And now they have people starving in Sri Lanka and they’re overthrowing their government, but they had a 98 out of 100 ESG score.”

Sri Lanka’s economy collapsed and its president has fled the country for Singapore, according to CNN. But research firm World Economics awarded the nation an ESG score of 98.1, almost twice that of the United States, which received a score of 58.7.

The U.S. is also struggling through an energy crisis, but President Joe Biden has attacked the energy industry while the ESG movement has made it more difficult to “loan to oil and gas companies,” Lambert said. He also slammed Biden for bleeding dry the Strategic Petroleum Reserve (SPR) as gas prices soar. “Releasing a million barrels a day” from the SPR is “really not much of anything” on a global basis, Lambert explained.

“This is all to try and get some pricing down before the election in November,” he added.

Payne responded: “It’s a hell of a price to pay to try to win an election.”

Conservative podcast host Glenn Beck defined the “Great Reset” in his book on the subject:

The goal of the Great Reset is both shocking and wildly ambitious: to transform the global economy, eliminate free markets, [and] impose a new, more easily controllable and malleable economic system.