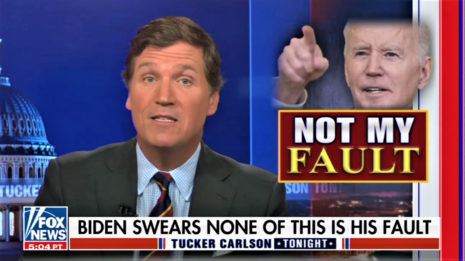 “The price of gas in America now qualifies as a catastrophe,” Carlson said on the June 15 edition of Tucker Carlson Tonight. “That's true [because] no matter how you feel about carbon emissions, you still probably assumed you'd be able to afford to drive to work every day or take a vacation with your kids this summer or buy dinner in a restaurant once in awhile. But now you can't, and gas prices are the reason you can't. Nothing makes the country poorer, faster than rising energy prices.”

He pinned a big portion of the blame right where it belonged: President Joe Biden.

“So how did this happen?” Carlson asked.

High gas prices should surprise no one, Carlson explained, because Biden shared his plans to end fossil fuel production at a campaign rally in 2019. “Kiddo, I want you to just take a look, okay?” Biden said, speaking to a young girl in New Hampshire. “You don't have to agree, but I want you to look in my eyes. I guarantee you —  I guarantee you — we're going to end fossil fuel.”

“He canceled federal drilling permits and pipelines,” Carlson said. “Then, just a month ago, the administration canceled three oil and gas leases in Alaska and the Gulf of Mexico, and that eliminated more than a million acres of potential drilling sites.”

Biden also repeatedly echoed the mantra that “Putin’s Price Hike,” and not his own policies, caused the energy crisis.

Carlson followed that absurd claim to its equally absurd conclusion:

“Gas prices are high right now because Vladimir Putin made them high. How did Putin do that? Simple. From his lair in a torture chamber deep beneath Lubyanka prison in Moscow, surrounded by empty vodka bottles and the severed heads of his enemies, Putin signed an executive order raising the price of unleaded gasoline and diesel fuel in the United States.”

Tucker concluded by slamming Biden apologists in the media and in the Washington, D.C., establishment who have gone to great lengths to shield him from any responsibility for America’s energy crisis:

“Look, we could go on, but the theme is really simple,” Carlson said. “Nothing is Joe Biden's fault – not gas prices, not meat prices, not the media's coverage of inflation. None of it. You know whose fault it is? It’s Vladimir Putin's fault.”