Bloomberg News had the audacity to claim that overturning the abortion-sanctioning Roe v. Wade (1973) is erasing women’s “economic gains.” 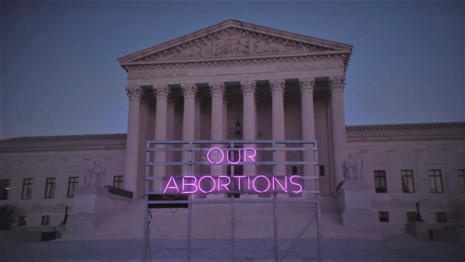 Bloomberg News published a May 3 story headlined, “Abortion Rollback Risks Erasing Decades of Economic Gains for U.S. Women.” The story wailed that “[o]verturning Roe v. Wade risks widening economic inequality in the U.S., threatening decades of gains for women in places where abortion could be all but banned.”

But the radical pro-abortion advocates at Bloomberg News didn’t stop there. The outlet even claimed that the Supreme Court finally undoing Roe would cause an “economic fallout [that] would last a lifetime, weighing on personal finances, states’ social safety nets and potentially labor market participation.” So stopping the slaughter of children would hurt the economy, according to that logic.

Bloomberg attempted to portray abortion as an economic issue, as if the lives of unborn children could be measured like economic data points on a graph. The article followed news that Politico shared a leaked Supreme Court draft opinion revealing the court is expected to overturn the notorious 1973 Roe v. Wade decision.

Justice Samuel Alito slammed Roe in the initial draft of the opinion. “Roe was egregiously wrong from the start,” he wrote. “Its reasoning was exceptionally weak, and the decision has had damaging consequences.”

The article also fretted that women across the United States would fall deep into a pit of poverty without abortion. “Access to abortion is credited with expanding womens’ roles in economies and labor markets around the world,” Bloomberg reported. “The ability to access safe abortions is what keeps many American women from falling into poverty, according to decades of research.”

No citation was given to back up the claim that “decades of research” supported Bloomberg News's assertion that abortions helped prevent many American women from poverty.

But that didn’t stop Bloomberg News from quoting pro-death extremists and asserting that abortion was a greater risk for the economy than for unborn children. Diana Foster, director of research at Advancing New Standards in Reproductive Health, a program within the Bixby Center for Global Reproductive Health at the University of California San Francisco, reportedly told Bloomberg News: “This is not good for the economy. You’re removing women from the labor market, and forcing women to raise children who do not have enough resources to provide housing and food.”

Foster’s argument implied that women must choose between either economic sufficiency or parenthood, but there was a third option that she neglected to mention. 117,470 children were  waiting to be adopted in 2020, according to Statista.

Bloomberg News also spun the abortion news as bad for “Lower-income Black and Hispanic women” who supposedly “are disproportionately affected by restrictions, as they’re more likely to lack the funds and ability to get time off work to travel out-of-state for care.”

The radical race-baiters at Bloomberg News continued: “Widespread abortion restrictions would disproportionately hurt women of color, who are already further behind their White counterparts in the U.S.”

Conservatives are under attack. Contact Bloomberg News at letters@bloomberg.net and demand it stop publishing pro-death and pro-abortion propoganda.