CNN commentator Fareed Zakaria couldn’t seem to understand why Americans seem “gloomy” about a “strong” economy. Has he been paying attention? 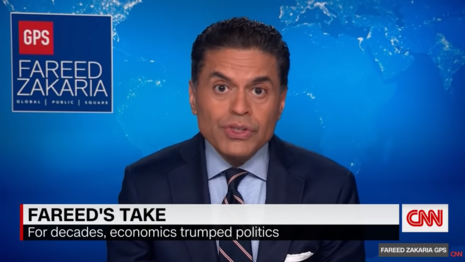 In a Washington Post opinion piece headlined “Our economy is doing well — but many Americans refuse to believe it,” wrote Zakaria, with a reported net worth of $14 million. He claimed that Americans were not responding “rationally to objective data” on the economy.

Worse, he argued fears of inflation were “probably exaggerated.” At least one measure of “objective data” greatly undercuts Zakaria’s points: Inflation eroded American workers’ “pay by 1.7% over the past year,” CNBC reported the same day Zakaria’s op-ed was published. Zakaria asked: “There is a puzzle at the heart of American political life right now: Why are people so gloomy about an economy that is so strong?” Perhaps that’s because the economy isn’t as strong as he suggested.

He proceeded to downplay inflation but overlooked spiking gas and food prices that are drilling holes into the wallets of everyday Americans. Zakaria cherry-picked numbers throughout his piece in an attempt to demonstrate that America currently has a “strong” economy. He listed “5.7 percent” growth in 2021, “4 percent” unemployment, “Americans’ savings” reportedly increasing, “poverty” and “child poverty” both reportedly falling, “new business creation” and reduced “bankruptcies.” And while those indicators may seem assuring, the last three statistical categories were sourced directly from the George Soros-funded Center for American Progress.

Zakaria probably did not expect the Bureau of Labor Statistics to report on Feb. 15 that wholesale prices would jump a whopping 9.7 percent, which beat expectations and was just “slightly below the 12-year high of 9.8% notched in November and December,” according to Fox Business. The impact of inflation on farmers has also become steeper, with higher seed, fertilizer, weedkiller and labor costs potentially pushing up grocery bills this year, Fox Business also reported. Zakaria also conveniently ignored mentioning anything about the apocalyptic sights of empty grocery store shelves.

Zakaria devoted most of his energy to debunking Americans’ fears over inflation, which rose by 7.5 percent to a record 40-year high. He conceded the surge in inflation but told Americans not to worry because “as forecaster Mark Zandi notes, the increase is only from an extremely low base of 1.4 percent in January 2021.” He then undercut his argument further by acknowledging that inflation was “too high” thanks in part to Biden’s bloated COVID-19 relief package. “But the fears of ever-escalating prices are probably exaggerated,” he allayed.

He paraphrased the leftist New York Times economist Paul Krugman who pointed the finger at the nasty “right-wing media” for “focus[ing] on inflation and not enough on jobs.” Krugman, who admitted he was “wrong” on inflation after gaslighting Americans for months on the issue, was a questionable source for Zakaria to use to bolster his nonsensical argument.

Conservatives are under attack. Contact The Washington Post at (202) 304-6000 and demand it stop gaslighting Americans on the Biden administration’s poor economy and rising inflation.