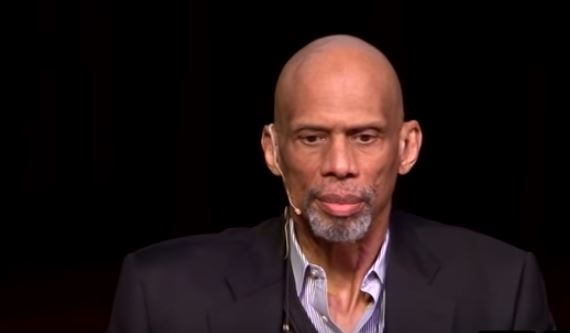 While beefing about Major League Soccer (MLS) banning the anti-fascist Iron Front banner at its games, retired NBA star Kareem Abdul-Jabbar writes in a UK Guardian rant that curtailing the free speech of athletes or fans is not consistent with our vision of democracy. His is a slanted view of democracy, though, because he also says that if sports leagues allow fans to wear MAGA hats or play the National Anthem, then they must also allow all political activities.

If sports leagues applied his warped reasoning of free speech, "political police" would examine all hats, t-shirts, jackets and banners at stadium entrances. And their determination of what constitutes "politics" would be more similar to Colin Kaepernick's than those of patriotic fans. The flag and a certain red hat inspired by a president are at the top of Abdul-Jabbar's list of "political":

"What leagues can do is insist that expressions of political allegiance are maintained within consistent parameters that insure they don’t interfere with fans watching the event they paid to enjoy. By consistent, I mean that if a stadium allows American flags or team banners to be waved or displayed, then they should allow political flags and banners of the same size to be waved by fans, as long as they don’t promote symbols of hate and violence, such as swastikas. Certainly, if fans held up large banners that blocked the view of other spectators, that would be a violation. But if you allow a MAGA hat or t-shirt then you have to allow an Iron Front hat or t-shirt."

Here's Abdul-Jabbar's principle for banning MAGA hats and shirts. He says athletes have "a constitutional right to express their outrage over social injustice in the hopes of improving lives," and fans should have the same rights. "But no one’s rights are absolute when the act of expressing them may restrict someone else’s rights." In other words, speech is free if you agree with him.

"The first problem with the stance that sporting events should be non-political is that the playing of the national anthem itself introduces politics into the sporting event. It’s blatantly pandering in an effort to associate the event with patriotism, akin to a politician kissing a baby or petting a puppy. It’s like telling a fan, 'You’re being patriotic just by being here, slurping beer and chomping a hot dog.'”

Abdul-Jabbar hates paid military events at ballparks and says that's commerce, not patriotism. If teams take money to honor the military, they shouldn’t then "suppress free speech while they’re busy selling the right to speak to the highest bidder."

Abdul-Jabbar made some more questionable statements, too. He chides team owners for their fears that political acts by athletes at the games will alienate the fan base. This faulty thinking, he says, was stoked by President Donald Trump's anti-protester tweets in 2017, but the league's revenue rose by five percent that year. He's mixing apples and oranges because that revenue increase was fueled by the NFL's television contracts, which were set before the start of the season and its many player protests.

Abdul-Jabbar quotes Thomas Jefferson, who urged us to “educate and inform the whole mass of the people… They are the only sure reliance for the preservation of our liberty.” He overlooks the progressive purveyors of falsehoods by accusing Fox News of misinformation.

"But, with so many Russian trolls disseminating false information in an effort to sway our elections, with a president who lies on a daily basis, with news outlets like Fox News that have been proven to report misinformation, and with most people restricting their input of information to sources they already agree with, sometimes the only way to convey an opposing opinion to the population at large is through public gatherings. Which is why it’s all the more important to make sure those avenues of expression stay open."

Although he'd rather those avenues of expression not stay open to the military, those holding giant flags and those wearing MAGA hats.