A Record High 40% Tell CNBC Economy is ‘Good or Excellent’

Many Americans think the economy is going to be great again.

Liesman added that was “the highest in our survey history.” He also reported high levels of economic optimism.

“But the amazing part about this, and I mean truly amazing, is the optimism inspired by President Trump,” Liesman said. The poll showed “some of the highest numbers we have seen in the ten years of this poll's existence.”

The respondents attributed their optimism to Trump proposals. Liesman said, “67 percent of those who say the economy will get better say it's because of the coming policies of the president.” 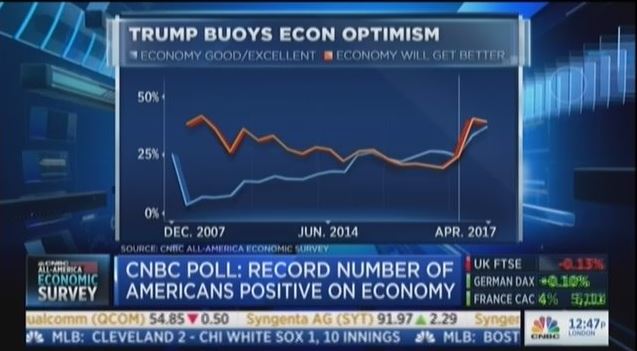 Trump’s actions toward improving the economy have often been ignored by the news media. In fact, between 97 percent of evening news reports about the president’s meetings with business leaders failed to include reactions from those executives. Between Jan. 20, 2017 and April 4, 2017, those news programs quoted just three of at least 99 CEO’s and business leaders with whom Trump had met with.

CNN Money staff writer Matt Egan even wrote story about a potential record downswing on Wall Street — but when the Dow climbed 151 points that same day the story was rewritten extensively. Since Trump’s election victory, the Dow Jones Industrial Average rose about 11.5 percent.