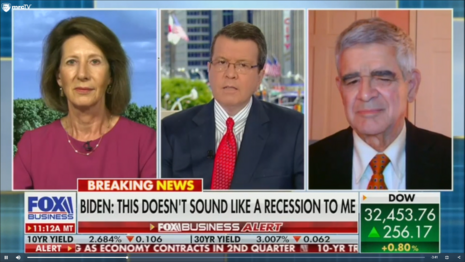 Following earlier news that the annual rate of inflation hit a 40-year-high of 9.1% in June, the BEA reported Thursday that the Personal Consumption Index (PCE) rose 6.8% (year-to-year) in June, the largest increase since January of 1982. Additionally, the Bureau of Labor Statistic’s (BLS) reported tha the Employment Cost Index (ECI) increased 1.3% in the second quarter of this year.

The news comes at a time when Democrats are drumming up support for their “inflation reduction” tax-and-spend bill, which seeks to raise $739 billion, more than half of which is earmarked to be spent on climate and green energy initiatives.

However, in an interview Thursday on Fox News Channel’s ‘Cavuto,’ George Washington adjunct professor of economics Diana Furchtgott-Roth and University of Maryland economist and Professor Emeritus Peter Morici explained how the new spending bill will make a bad inflationary situation even worse.

Still, there are other things President Joe Biden could be doing - but, isn't - they said.

”If President Biden wanted to reduce inflation, and reduce the forty percent increases in gas prices over the past year, he could expand natural gas production here at home, instead of going to Saudi Arabia and begging them to expand their oil and gas production.”

“If you tax something, you get less of it. Corporations will go abroad, they’ll produce less. The last thing we need is an increase in the corporate income tax, that isn’t going to give us any revenue.”

“Unless you’re going to start taxing savings accounts, you’re not going to do anything about the excess demand. Right now, people’s incomes are growing slower than prices.

“They are not bidding up the prices, but rather, they are being victimized by the higher prices – which come from, for example, this administration’s neglect of farm problems.”

“Cracking down on refineries, as this administration has done, means we have less refining capacity. So, he’s basically manufacturing shortages of fossil fuels – for what purpose is beyond me - because we can’t substitute out of them.”