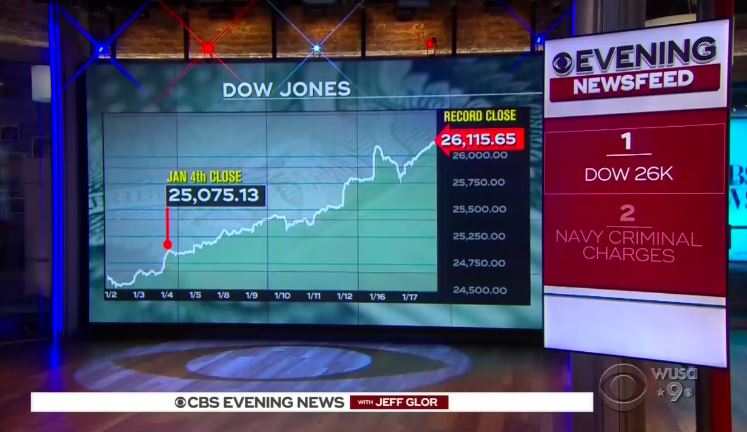 The Dow Jones Industrial closed above 26,000 for the first time in history Jan. 17, but NBC Nightly News with Lester Holt didn’t say anything about the latest record. Instead, it spent nearly two minutes on dieting.

The only acknowledgement from Nightly News that Dow crossed that milestone was the on screen graphic which listed the Dow, NASDAQ and S&P closing numbers without commentary. The graphic didn’t even note that the Dow’s close at 26,115.65 was a new record high.

Nightly News had ample time to cover the record with an anchor read, or better yet — and actual story. But it didn’t. Anchor Lester Holt and correspondent Catie Beck did spend one minute, 54 seconds discussing a “new approach” to dieting that controls when you eat instead of what you eat. The show even took the time to interview a woman who followed the strict eating schedule, showing her feeding goats and cooking in her kitchen.

In contrast to Nightly News, ABC World News Tonight with David Muir and CBS Evening News both mentioned the latest Dow record. But even those broadcasts only gave it a combined 26 seconds. Both reported the latest record came several days after the Dow closed above 25,000 for the first time.

The Jan. 17, Dow record was the seventh set so far in 2018. By virtually ignoring it, Nightly News maintained the broadcast network evening news shows’ pattern of ignoring many stock market records. The networks ignored 25 of the first 31 Dow records set under President Donald Trump.